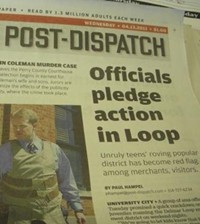 The parent company of the St. Louis Post-Dispatch, Lee Enterprises, announced plans yesterday morning a plan to refinance nearly $1 billion of debt -- only to announce later in the day they were abandoning those plans due to unspecified "market conditions."

We're not really sure what's going on here, beyond the fact that Lee's stock was way down yesterday. (As one financial website reports, Lee had one of the worst-performing low-priced stocks yesterday, with prices down 9.9 percent.) And that may have something to do with  a quarterly report from the company, also issued yesterday, that showed a further drop in revenue -- Lee is down 3.8 percent overall, compared to this time last year.

That's the hard economic lesson behind the quarterly earning statement. The company reports that -- despite an impressive increase in web-based ad sales and nearly twice as many unique visits to the company's websites, compared to a year before -- total ad revenue is still down five percent percent this quarter.

And that quarter, of course, was a drop from the one the year before that. And so on and so forth, as profits continue to decline in the newspaper industry's version of the classic figure skating death spiral.

So can we dig any chestnut of good news out of yesterday's news? We're still not sure what the change of heart on the refinancing means in the long term, but we can tell you this: Revenue in Lee's Midwest region is only down 3.3 percent this quarter. It's in the West that the company has real problems -- there, they're down 9.3 percent. We suspect this may have to do the real-estate bubble bursting big-time out west; Lee has papers in a host of California towns, including Hanford, Escondido and Santa Maria, as well as three in Oregon. Based on this report, at least, they appear to be dragging the company down.

And if you're wondering how that possibly counts as good news, hey: It's nice to know St. Louis isn't the problem. Blame the West Coast!

As for the plans to refinance a bunch of stock: The company's debt payment isn't due until April 2012, so presumably they have plenty of time to find buyers and avoid bankruptcy. And while the vultures may be rooting against them, we're not.