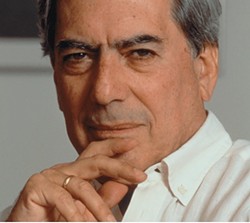 It's really hard to top a Nobel Prize, but once you've won that, what else are you going to do? Mario Vargas Llosa, the Peruvian novelist who won the big prize last year, has elected to keep on collecting awards, notably the St. Louis Literary Award, presented by the Saint Louis University Library Associates.

Vargas Llosa will come to St. Louis on November 14 to collect his prize, SLU officials announced today. There will be a dinner and a public reading and lots of adulation and even an honorarium (although Hugh Law, president of the Library Associates, claims not to remember how much it is).

"We're delighted to be able to give this award to Vargas Llosa," Law says. "We picked him because of his eminence and because we wanted to recognize the zeitgeist of Latin America over the past 30 years."

Between now and November, Law plans to brush up on his Spanish so he can read Vargas Llosa's work in its original language.

The St. Louis Literary Awards were established in 1967 as a way to build up the prestige of SLU -- and by extension all of Midtown, which was, at the time, in serious decline. The first recipient was the historian Henry Steele Commager, and in subsequent years, winners have included Tom Wolfe, David McCullough, Robert Penn Warren, Joan Didion, Tennessee Williams (bonus! native St. Louisan!) and, last year, Don DeLillo. Many of the awardees have been historians or particularly historically-minded.

Vargas Llosa falls into that company; in the past, he's claimed that it's impossible to be a Latin American novelist and not write about politics. In addition to his novels -- of which The Feast of the Goat, The War of the End of the World and Aunt Julia and the Scriptwriter, which was made into the movie Tune in Tomorrow, are probably the best-known -- he's been a newspaper columnist and, in 1990, ran for president of Peru and was soundly beaten by Alberto Fujimoro.

He's also no stranger to St. Louis; in the past, he was a visiting scholar at Washington University. When he comes back here in the fall, he will give a guest lecture, which will be open to the public, and possibly sit in on a few SLU classes.