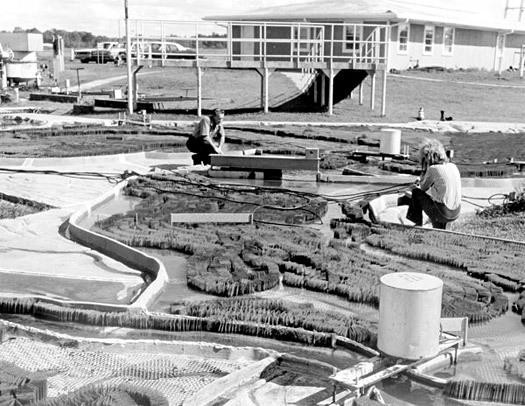 This spring, computer models helped the Army Corps of Engineers determine the exact outcome of flooding when the agency made the controversial decision to blast the Birds Point Levee south of Cairo, Illinois, to alleviate the rising waters of the Mississippi and Ohio Rivers.

But before computer models, the Army Corps of Engineers used another method to determine flooding outcomes. Lying abandoned today in rural Mississippi lies a 200-acre replica of the Mississippi River once used to anticipate the effects of flooding along the river's entire basin -- from Montana to Pittsburgh and as far south as New Orleans.

As the architecture and landscape journal Places recently documented, the scale model of the river -- complete with running water -- was one of the most demanding projects the corps ever built.  And they did much of it with slave labor, using Axis-power POWs captured during World War II.


The prisoners cleared the site of a million cubic yards of dirt and rough-graded the land to match the contours of the Mississippi River Basin. To ensure that topographic shifts would be apparent, the model was built using an exaggerated vertical scale of 1:100 and a much larger horizontal scale of 1:2000. While the existing topography offered a close approximation of the actual Mississippi Basin, some areas required significant earthmoving; the Appalachian Mountains were raised 20 feet above the Gulf of Mexico, the Rockies 50 feet. An existing stream running east-to-west provided the model's water supply.

Construction would outlast the war with the project starting in 1943 and ending in 1966 -- just five years before computer models rendered it somewhat obsolete.


A 20-acre section in the center of the 200-acre site would be subject to high-intensity tests. Here the engineers installed a "fixed-bed model" that enabled greater precision and control, modeling the river channels and overbank flood areas in concrete. This section represented the areas of the central and lower basin perceived to be most vulnerable to catastrophic floods: the Mississippi River from Hannibal, Missouri, to Baton Rouge, Louisiana; the Atchafalaya River from its confluence with the Mississippi to the Gulf of Mexico; and the lower reaches of key tributaries, the Missouri, Ohio, Cumberland, Tennessee, Arkansas and Ouachita Rivers.

In 1952, the partially-built model was used to determine the outcome of heavy rains along the Missouri River feeding into the Mississippi. Using data collected from the model, the corps was able to reinforce and build higher levees along the key tracts of the real Missouri River that's credited in saving $62 million in property damage.

That would be one of model's crowning achievements. By the mid-1990s the project was abandoned. It now lies buried in overgrowth outside the town of Clinton, Mississippi.