Think You're Hot? Try Living In a Tent Down By the River 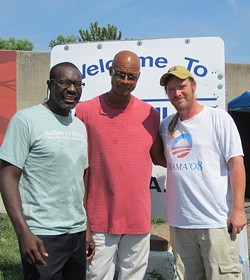 As St. Louis Board of Aldermen President Lewis Reed explains, residents of the homeless camp "Hopeville" north of downtown can keep warm in the winter by insulating their tents and shanties against the elements.

"They'll take a tarp and put it over the ceiling and then put a blanket over the tarp and add another tarp on top of that," says Reed. "Then they place a heating element inside, and it's warm enough to survive."

But in the scorching heat of the summer with temperatures this week entering the triple digits?

"There's not a lot they can do to keep cool," says Reed, who's soliciting donations this week for Hopeville through his online publication, St. Louis Core, as well as Twitter and other social media. Yesterday, Reed and his campaign aide, Rory Roundtree, delivered 30 bags of ice donated by Arctic Ice to the roughly three-dozen people sticking it out in Hopeville. Today they'll drop off fourteen cases of donated water.

Reed's actions would appear to contrast those of St. Louis Mayor Francis Slay, whose office has called for the dismantling of Hopeville and other homeless camps along the Mississippi River north of Laclede's Station.

"Do I think that Hopeville someday needs to be torn down?" asks Reed. "Yes. But before then we need to get these people into permanent housing. A lot of good people are working diligently on that issue, but in the meantime, the fact remains that these people are out here and they need some help."

Reed says Hopeville's residents and its camp leader, a guy named Moe, have been extremely appreciative of the ice and water. Still, it hasn't been enough to keep people in Hopeville during this heat wave. "There are a lot of abandoned buildings nearby, and many Hopeville residents have moved into them to try to keep cool," says Reed.

The aldermanic president credits community activist Brian Matthews with drawing his attention to the plight of Hopeville residents. The 36-year-old Matthews travels from his home in Dogtown to Hopeville several times a week to visit with residents and play cards.

"You'd think that people in Hopeville would be a lot more irritable this week because of the heat," says Matthews. "But that hasn't been the case. People are conserving their energy. They're doing what they need to early in the morning or after dusk and staying in the shade as much as possible."