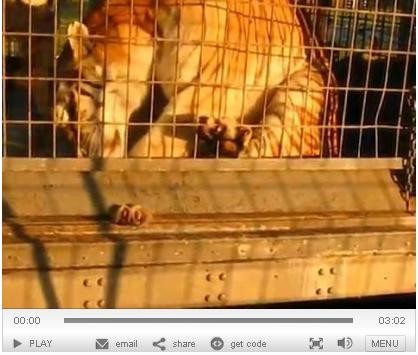 UPDATED AT 3 p.m. with additional information

An investigation into the health and welfare of a tiger associated with the UniverSoul Circus, which is currently playing Jamestown Mall, has been closed -- after three vets from the USDA visited the site and gave all nine tigers a clean bill of health.

People for the Ethical Treatment of Animals had contacted the county after obtaining footage from the circus' stint in Buffalo, New York, showing one of the tigers with his paw apparently trapped beneath the bars of his cage. And when county officials visited the tiger July 19, they noticed she was limping. At that point, they asked circus workers to show proof that the tiger had been checked out by a vet.

Yesterday, those papers were produced. But while the county initially indicated that would be enough to close the investigation, the situation proved more complicated. John Shelton, a spokesman for the county department of health, says that the last veterinary visit was July 14. And since the tiger seems to have developed a limp since then, the county suggested the animal should not perform.

While the county did not intend to police tonight's performance, Shelton made it clear that UniverSoul Circus could be issued a summons if they learned the limping tiger was performing. (And, go figure: PETA confirmed it intended to be watching the circus closely.)

But that situation changed abruptly this afternoon, when three veterinarians from the USDA visited the circus grounds and cleared all nine tigers, including the once-limping Mariah, to perform, Shelton says.

"They found no tigers limping," he says.

To clear up some previous confusion while we're at it: Based on incomplete information it had received, PETA told Daily RFT yesterday that the county found two limping tigers. Everyone agrees now that only one, Mariah, was showing a limp.

Hank Ernest, a spokesman for UniverSoul Circus, told Daily RFT yesterday that the circus has policies in place to safeguard its animals. He said that Mariah had been playing when she got her paw stuck in a flap used to convey food into her cage. The tiger, he says, is just fine.