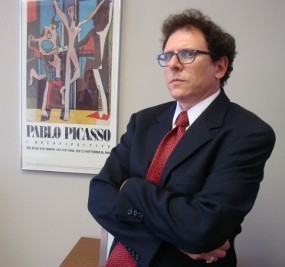 How much empathy does one need to be an effective talk therapist? Can university professors aptly determine whether graduate students have enough of it to join the counseling profession?

These questions lie at the heart of a lawsuit that's been filed against Webster University by a miffed student, who was dismissed from the school's Master's-level counseling program in March. The week before David Schwartz received his termination letter, he claims his adviser told him he lacked the necessary empathy the profession demands.

Schwartz, a 44-year-old University City resident, doesn't quibble over whether he's capable of handling the emotional pain of potential clients. Rather, he's accusing the university of breaking its code by dropping him without offering to help fix his deficiency. That Schwartz achieved a 3.78 GPA through the five semesters prior to his removal suggests he deserved better, he contends.

"I worked hard at my studies, and they didn't give me due process, so I'm seeking justice," says Schwartz, who claims to have amassed $70,000 in student loans while enrolled at Webster. He's suing for $8 million in punitive damages, alleging fraudulent misrepresentation and breach of contract, among other counts. To top it off, he suggests he's the victim of spiteful collusion between a pair of amorous profs.

Schwartz enrolled in the Webster program in June 2009 after an unfulfilling career as a computer help-desk technologist. He'd already earned a Master of Social Work degree from Washington University but believed he needed more counseling training. Through the end of last year he'd earned fourteen "A"s and one "C."

The 2011 spring semester required him to undergo a clinical practicum that included three mock counseling sessions conducted under the lens of a video camera. Following those three sessions, Schwartz's adviser, Stacy Henning, called for a February 24 meeting and told Schwartz he needed work on his clinical skills. She also noted that he might have to repeat the practicum once or twice in order to graduate and offered to help him develop his clinical skills, Schwartz claims.

One week later, on March 3, Henning sat down with Schwartz again to inform him that he lacked the empathy that was necessary to be an effective counselor, Schwartz says. She said she was forced to fail him, automatically making him ineligible for completion of his degree program given that one "C" grade on his transcript.

As Schwartz recalls, "She turned off the videotape [of the mock-therapy session] and said, 'David, you would fail as a counselor. It is my duty to you, and to the profession, not to let that happen. It's a wonder how you made it through the program this far.' "