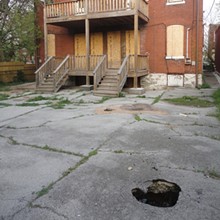 One out of every five rural roads in Missouri is in poor condition, according to a report released today by a Washington, D.C. transportation research group.

And nearly as many of Missouri's rural bridges -- eighteen percent -- are structurally deficient.

Those alarming statistics have been notched even as traffic on rural roads and bridges has greatly increased throughout the nation. The 34-page report, penned by an organization called TRIP, notes that travel per-lane mile is up 34 percent since 1990 on rural interstate routes -- and 15 percent on non-interstate rural roads.

"Traffic fatalities on the nation's rural roads occur at a rate more than three times higher than all other roads," the authors note. "A disproportionate share of fatalities take place on rural roads compared to the amount of traffic they carry."
So is there a bloodbath happening on Missouri roads? Surprisingly not: Our fatality rate per 100 million miles of travel on non-interstate rural roads is just 2.31 -- making us safer than nineteen other states.

Top state to bite it on a rural road? South Carolina, a state which has a fatality rate of 4.7 deaths per million miles of travel, roughly double the rate of Missouri's. Next up: Florida. All those oldsters driving around half-blind and half-senile, undoubtedly.

As for the state with the crappiest rural roads, Vermont takes the prize. TRIP concludes that 36 percent of its major rural roads are in poor condition. Missouri ties with Alaska for eleventh lousiest on that list; our bridges are considered the seventh worst in the nation, just behind Nebraska.

Speaking of Life, Health, And ... Death