How Much is Albert Pujols Worth? 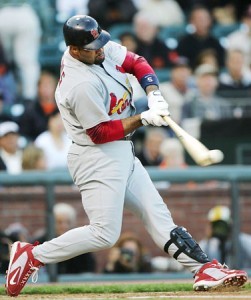 Lamar Pierce, an associate professor of strategy at Washington University's Olin Business School, wants to make it clear: He does not think Albert Pujols, who's likely to get a substantial raise in 2012 no matter which team he plays for, is overpaid.

"Pujols should be the highest-paid player in baseball, because he's the best," Pierce tells Daily RFT. "But in order to be paid the most, he should get paid more than Alex Rodriguez, who gets paid too much." Since A-Rod got paid $32 million last season -- he's midway through a ten-year, $275 million deal he signed in 2007 -- we would have to agree. Pujols, by contrast, earned a mere $16 million in 2011.

"It's hard to pay Albert Pujols what he's worth," Pierce continues. "It has to be fair compared to what Alex Rodriquez is paid. You have to think in relative terms rather than absolute."

Weirdly enough, Pierce says, most people would rather be paid a salary of $50,000 and know that it's higher than everybody else's than be paid $70,000 when everybody else is making $80,000. "You look at somebody else and think, am I better? How much is that person getting paid?"

Pierce just published a paper about this very subject called "The Psychological Costs of Pay-for-Performance: Implications for the Strategic Compensation of Employees," forthcoming in the Strategic Management Journal. CEOs' salaries escalate much the same way baseball players' salaries do: The highest-paid CEO's salary becomes the benchmark for everyone else's. If another CEO is perceived as better, his or her salary needs to be higher.

"It just takes one person to get overpaid and then everyone sees them as a benchmark," Pierce says. "And then it escalates."

Pierce acknowledges that it is difficult to determine the value of a baseball player, even a perpetual All Star. "That's what that Moneyball stuff is," he says, "calculating how much a player is worth to a team. That doesn't just mean statistics, though. It also means the long-term effects of a star on attendance and the sale of merchandise. And that, Pierce says, is why Moneyball hasn't caught on among more teams.

"If all you care about is winning," he says, "there are more efficient ways of money than on big stars." But most teams pay for them anyway. And the ones who don't, notably the Oakland A's, whose executives pioneered Moneyball, don't win World Series.

Pierce won't say how much he would pay for Pujols, were he the Cardinals' owner. "I don't want to say Albert Pujols is overpaid," he says. "For most players, like Alex Rodriguez and Derek Jeter, I would say yes. But Pujols is the best hitter in baseball. That's worth a lot of money. I don't know what that number should be, but it should be worth it."