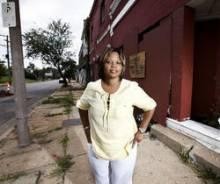 Today state Representative Jamilah Nasheed, subject of our August feature story Just Who Does Jamilah Nasheed Think She Is?, announced that she is running for the state Senate seat currently held by Robin Wright-Jones.

Nasheed, who is in the middle of her third term in the state House, immediately becomes an imposing challenger to a vulnerable incumbent. She has high name recognition and has been extremely popular among her constituents. She ran unopposed in her last reelection primary and took 75 percent of the vote two years before that.

According to the last campaign finance reports, Nasheed has around $29,000 in her war chest. Wright-Jones has less than $700. Moreover, Wright-Jones, 5th District state Senator since 2008, made news last March when the St. Louis Post-Dispatch's Jake Wagman reported that the Four Seasons hotel sued her for not fully paying a $6,000 tab, less than half of which was picked up by lobbyists. Soon after, in June, Wagman reported that Wright-Jones filed a campaign finance report that failed to account for $95,000, which Wright-Jones said was a mistake by her campaign's treasurer. The P-D article also mentioned that the state Senator, "lists in the May report $111 spent at Marmi, a shoe store at the Galleria Mall. In a description line in the campaign report, the expense is listed as 'non-campaign.' Wright-Jones said she bought the shoes for a political event but could not recall which one."

By seeking a jump to the Senate, Nasheed leaves a district that had been redrawn to include two other House Dems, Karla May and Chris Carter.

Her ties with Republicans, however, have been useful considering they hold a two-thirds majority in the state House and a three-fourths majority in the state Senate. She was able to pass a bill to make students in the city's unaccredited school district eligible for the state-funded A+ Scholarship Program. She was able to secure more than $1 million in state funding for a dropout recovery program and a science and math tutoring center. And, with heavy support from Republican House Speaker Steve Tilley, she was able to push a local-control bill out of the chamber for the first time in 150 years.

That local control bill, which has yet to reach the Senate floor, will be on the agenda when Jeff City gets back in session this week.