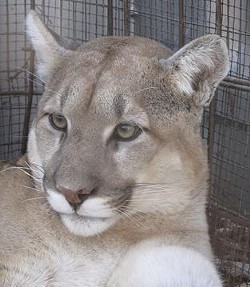 Thought: University of Missouri should really change its mascot from the tigers to the mountain lions.

In the past 14 months there have been 17 confirmed sightings of the big cats in Missouri, with this week's run-in with a mountain lion the most convincing confirmation yet.

It happened Wednesday when a trapper in southeastern Missouri went to check on a cage he left in the Mark Twain National Forest about 130 miles south of St. Louis. Wayne Henson usually finds bobcats, raccoons and coyotes in his trap. In place of those animals this week was a 122 pound cougar.

Kudos to Henson for not killing the federally protected animal (like other yahoos have done). Henson called the Missouri Department of Conservation, which sedated the animal and released it back into the wild.

The cats can only be killed if posing an immediate threat to livestock or people, and conservation officials say there was no reason to believe the animal was a risk to either. They believe the animal, a two-year-old male, roamed into Missouri from western states.