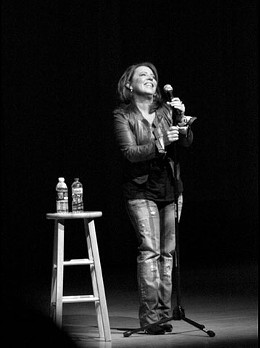 Kathleen Madigan -- native St. Louisan, former Houlihan's server and now one of the most successful comics in the country  --  recently reflected on her home state in an interview with Boston Magazine:

Ninety percent of us in the Midwest don't come from someplace "cool" that we feel attached to, so we don't have an attitude about it. We don't have that kind of crazy state pride like, there was this guy in Texas who right before he was executed, yelled "Go, Cowboys!" There's no way that anybody from St. Louis, right before you kill him, is going to yell "Go, Rams!" It's just not going to happen.

By the way, to all you comedy nerds trying to revitalize the St. Louis standup scene by hosting open-mics in weird venues: Have you pulled it off at Taco Bell yet?

Back in her day, Madigan reminisces, aspiring standups in St. Louis did just that:

Those [off-beat] places have always existed but they really are different than a club. I got my start in those places in St. Louis, there was this guy Steve who was a go-getter who would run around and make up comedy nights wherever. He even tricked a Taco Bell into hosting comedy on Wednesday nights, he was amazing, he made things happen instead of just sitting around and bitching about it.

Daily RFT promises you, comedy nerds: If you hold an open-mic comedy night at a Taco Bell, we will cover it.

You will also have to buy us a chilito.

(Do they still have those?)

(And by "chilito," we mean "chili cheese burrito," not the Mexican slang word for a small wee-wee.)

Jump to comments
« Larry J. Davis Pleads Guilty to Mar…  |  Up Next For the Blues: Quickly Come… »