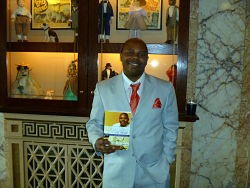 Attention ladies of St. Louis: We are in the middle of a R.E.A.L. Love Celebration. Dwayne L. Buckingham, a psychotherapist and author from Silver Spring, Maryland, has come to town to promote his new book, Qualified, Yet Single, and will explain to you tonight why even the most eligible-seeming men won't commit. That is, if you go to Legacy Books and Cafe for an evening of spoken word, comedy and, yes, speed dating.

"The book teaches educated single women how to deal with men who are educated and stable and won't commit," Buckingham explained yesterday afternoon during his book signing at the Tivoli Theatre, prior to a screening of a short documentary based on the book.

You mean that even if you find a man who's not broke or crazy, your problems still aren't solved? Which means every damned romantic comedy ever made is a lie? Say it ain't so, Dr. Buckingham!

"A man's credibility doesn't make him qualified to be in a relationship," Buckingham lectures. "He needs to be balanced. He needs to have a work ethic and the emotional maturity to meet a woman's needs."

Buckingham surveyed 100 men in Atlanta, St. Louis and the Washington, DC, metro area to find out why they're so weaselly. He concentrated on the African-American community (although in his practice, he consults with patients of all races) because the marriage rate among black men is so low. "40 million African-American men have never married," he says. "That's a lot of men.

"They have a lot of fear," he continues. "They're afraid of being vulnerable, of losing control, of being taken advantage of. They have heartbreak trauma -- they've been hurt before. And they think, if you don't make me commit, why should I? How women behave influences men. Because of the women's movement, women are more independent and postponing childbirth for their careers. Marriage is optional."

There you go, ladies. There's your answer and your way out of feeling like a total loser for not being hitched already. The good news is, as Buckingham says, marriage is now only one of several options. If they won't commit, why should you?