Walmart Shoplifter Also had Meth Cooking in Her Purse 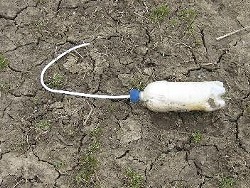 Stop me if you've heard this one before: A shoplifter, a meth cook and a dumb-ass all walk into a Walmart -- and they're all the same woman.

A woman not yet identified by police was caught shoplifting in the Walmart at Telegraph Road and Interstate 255 last night around 6 p.m. Police were called, and a one-pot meth lab was found simmering in a 20-ounce soda bottle in her purse. Because hey, why not multitask while you're doing your shoplifting, right?

The store was cleared, police searched the woman's car and confiscated other meth-making necessities such as pills and chemicals, and she and her male companion were both arrested. Their names and ages -- as well as what will most likely be memorable mug shots -- have yet to be released.

I hesitate to use the word hoosier because it upsets my mother-in-law (an Indiana native), but how big of a hoosier do you have to be to set the timer on a drug-bomb, throw it in your purse and then go out to a crowded store and do a little shoplifting? If that thing had exploded, which is more likely than less likely with the one-pot method, the best you could hope for is that she took the brunt of the blast and was the one with most of her skin burned off. But with assholes of this magnitude, it seems that they always escape serious injury and some bystander gets the shaft.