Jason Motte Vs. Twitter: At Least Johnny Cueto Didn't Kick Him in the Face

To remind you that the Cardinals-Reds rivalry blabbed about for two nationally televised baseball games this weekend is in fact legitimate, if you're a Reds fan. 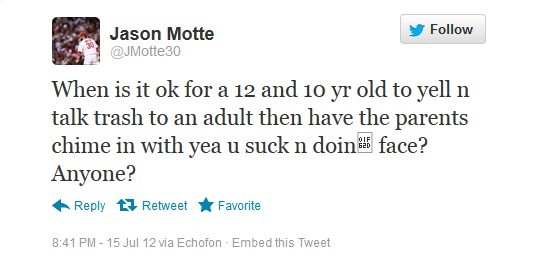 Most of the replies to Motte took this form:

And there is the #BlockedByMotte hashtag, based on the closer's apparent blocking of Reds fans on Twitter who were tweeting at him:

Nice Photoshop skills, including lifelike tears on this Cardinal:

Great #reds weekend. Sweep. Rolen resurgence. Got a #stlcards fan kicked out friday using the security text. She was cussing us out. #clutch

@BengalDarrin I'd like to form a 'human centipede' with a Cards fans' mouth sewn to the ass of a Steeler fan, and on and on.

And another Steelers fanbase comparison, is it accurate?

Never thought it was possible but Cardinals fans have overtaken the steelers fanbase as most annoying arrogant asshole fanbase!

The same person, Darrin Marsh, follows that up with the penultimate insult, the homosexual allegation:

How will chris carpenter explain to his son about being butt buddies with jason motte?

The reds are gay.

Let this serve as a reminder. There are no winners in a Twitter war.