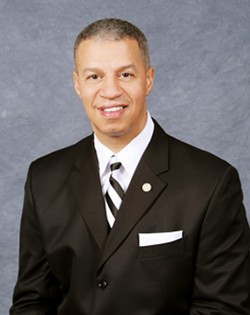 The Highway Patrol has confirmed that Alderman Gregory Carter, 54, was killed just after midnight last night in multi-vehicle incident on Highway 370. Carter, who served the 27th Ward during the day, worked as a driver for UPS overnight. He was elected to the St. Louis Board of Alderman in 1993. Ald. Carter leaves behind two children, Gregory J. Carter Jr. and Jennifer Noel Carter.
Carter hit a line of vehicles that had stopped after a minor accident involving a pick-up truck and a tractor trailer near Elm Street. The driver of the pick-up has been arrested on suspicion of drunken driving. He had hit a tractor-trailer, then parked his truck in the center lane to inspect it for damage. The driver of a another truck stopped to help him get off the roadway and on the shoulder. Another tractor-trailer stopped behind those two vehicles, and then Carter crashed into the back of this big rig.