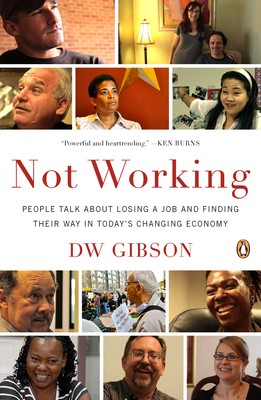 A couple of weeks ago, we checked in with DW Gibson, who was passing through town to read from his new book, Not Working: People Talk About Losing a Job and Finding Their Way in Today's Changing Economy. Among the 200 people featured in the book is St. Louisan and former A-B HR executive Roni Chambers. We told you it was worth reading. You evidently agreed: Not Working makes its debut on this week's bestseller list at number nine.

Also on the list this week (again) is Gillian Flynn's Missouri-set and highly-addictive thriller Gone Girl and Fifty Shades of Grey, also still managing to thrill.

1. The Other Woman's House by Sophie Hannah 2. Fifty Shades of Grey by E.L. James 3. Gone Girl by Gillian Flynn 4. Shadow of Night by Deborah Harkness 5. A Hologram for the King by Dave Eggers 6. A Discovery of Witches by Deborah Harkness 7. The Prisoner of Heaven by Carlos Ruiz Zafón 8. The Rules of Civility by Amor Towles 9. Not Working: People Talk About Losing a Job and Finding Their Way in Today's Changing Economy by DW Gibson 10. Steal Like an Artist: 10 Things Nobody Told You About Being Creative by Austin Kleon

1. Count to Sleep St. Louis by Adam Gamble 2. Catching Fire by Suzanne Collins 3. Dragons Love Tacos by Adam Rubin and Daniel Salmieri 4. Seraphina by Rachel Hartman 5. Bitterblue by Kristin Cashore 6. The Hunger Games by Suzanne Collins 7. Mockingjay by Suzanne Collins 8. How Machines Work: The Interactive Guide to Simple Machines and Mechanisms by Nick Arnold and Allan Sanders 9. I Want My Hat Back by Jon Klassen 10. Hoops by Walter Dean Myers