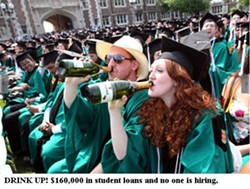 Stay away from the Washington University campus. According to Newsweek, their students are the most stressed out in the country.

They could have sent someone to interview the students, though there is obviously the danger that yet another person wanting something from them could reduce the scholars to hysterical, quivering heaps all over the quad.

Newsweek put together this year's results from the cost of tuition, on-campus crime rates, the number of students receiving financial aid and how much, the acceptance rate, and the selectivity based on ACT and SAT scores. In years past, the "academic rigor" was also factored in but that seems to have fallen by the wayside.

This year, Wash U knocked Stanford out of the number one spot, in part due to the hefty cost of admission ($58,901) and crime ranking (6th of the 25 schools ranked).

Fret not, you panicked pupils! Your school totally has a whole webpage dedicated to your anxiety addled brain. Then again, you should all probably be drinking more. Wash U hasn't even cracked the top 25 in party school rankings.