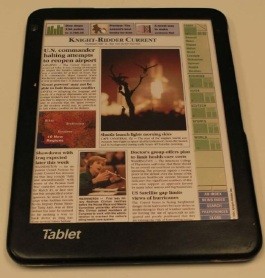 In what Wired magazine is calling "the patent case of the century," Apple is suing Samsung for "slavishly" copying Apple's tech and design as seen in -- among other things -- the iPad. Apple believes Samsung is trampling on its patent rights. The local-ish connection is this:

Earlier this week, Samsung produced testimony from a Missouri School of Journalism faculty member that calls into question the validity of Apple's iPad patent.

Roger Fidler is now Program Director for Digital Publishing at the Reynolds Journalism Institute (which is part of the J-School). But many years ago, according to his written declaration submitted to the court, he worked as a media developer at Knight-Ridder starting in 1979.

As early as 1981, he came up with the idea of feeding consumers newspaper content with a touch-screen tablet. In 1990, he produced a video on how such a tablet would work, and presented it to someone from Apple.

Then in 1994, Fidler worked at Knight-Ridder's Information Design Lab in Boulder, Colorado. Apple developers worked in the same building, and Fidler says they were exposed to his non-functioning prototype (see photo above) and a second video he'd made there. Fidler's firm wasn't trying to get its own patent; it wanted computer companies to start making a tablet so it could feed content into it. 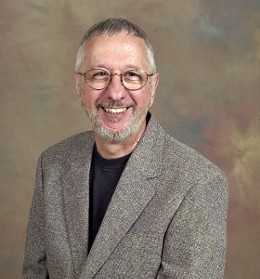 By producing Fidler's testimony, Samsung is ostensibly trying to argue that Apple should not have been able to secure its patent for the iPad.

Trial testimony is wrapping up in San Jose, California this week, and closing statements are expected next week. According to Wired, jurors will then have to decide "if any of the many patents involved in the case were wrongly granted, if they're being infringed, and how much the wronged party deserves in damages, if anything."

Fidler did not testify in person, but rather, via video testimony. He's explained to the Columbia Daily Tribune that it would've been inappropriate, because the J-School has ties to Apple and he doesn't want to mess that up. He also summarized his role in the case:


"I have nothing against Apple. I'm a fan of Apple products, and all along I've not made any claims to be the inventor of iPad or that my ideas were stolen by Apple. The tablet I created in 1994 and the video we created, it is what it is. It's up to the jury to decide whether or not what we produced in 1994 would have any influence on invalidating the Apple patent."

Tags: See You in Court!, Image

Speaking of See You In Court!