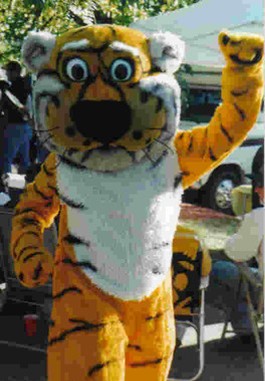 The Missouri Tigers will open their 2012 season Saturday evening, hosting Southeastern Louisiana in Columbia. (Always exciting to open the season with such a tough opponent.) While I personally won't be plunking down any of my hard earned money for the opportunity to see the Tigers play what should be a cupcake game on pay-per-view, I just might make my way to some local drinking establishment willing to do so in my stead. (I considered making the trek to Faurot Field, but time is not on my side this weekend, unfortunately.)
I have to admit to being more excited for the opening of this Mizzou football season than I think I can ever recall being before. Given the rather remarkable run the Tigers have been on the last six or seven years, in terms of on-field success, every season brings with it plenty of reason for optimism and excitement. This year, though, there's cause for even more of a buzz.
Just how Missouri fares as part of the monstrous Southeastern Conference, the 600-pound gorilla of college football, remains to be seen. But I can't say I'm not geeked to see just how it goes.
The Tigers have a good team this year. Or, at least, they should. Plenty of returning talent, including a dynamic quarterback still developing as a passer, and a crop of incoming players who rank among the best in all of college football. Mizzou should have more than enough talent to compete with any team, in any conference, at any time.
That being said, there are a handful of players whose performances could very well make or break the Tigers' season. In the interest of brevity, I'm going to stop yakking and just give you the list. Deal?
#5 -- E.J. Gaines, Defensive Back

A year ago, Gaines won All-Big XII honors in his first season playing full time as a sophomore. Now, as a junior, E.J. should be in a position to have a huge year.
Interestingly enough, of all the players on this list, Gaines may be the one who really benefits from the move to the SEC, rather than being challenged to excess. He will be facing the absolute cream of the crop as far as athletes goes, of course, defending the top receiver of every opponent, but no longer will he have to contend with the aerial assaults of the Big XII schools. No more Oklahoma State or Texas Tech firing the ball around 50+ times a game.
That's not to say there won't be challenges. While there are few SEC schools who light up the passing game the way Big XII schools do, with most utilizing a much more balanced attack, that does mean the Mizzou secondary will be pushed to perform more in run support. How well E.J. Gaines, as well as the rest of the Missouri defensive backs, adjusts to a different style of offense in the new conference will go a long way toward determining how successful the Tigers are at holding the opposition in check.