What's the Point of Surviving an Insanely Hot Summer If It Doesn't Set Any Good Weather Records? 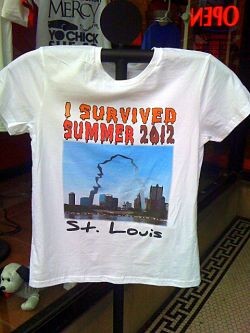 The autumn equinox and the official end of summer aren't for another week yet, but Labor Day has passed and there's a nice tinge of something in the air that might be an actual chill. Is it safe to say we've officially survived the scorching summer of 2012? No -- not "say." A better word would be "boast."

But our friends at the National Weather Service have to put a damper on our enthusiasm. They specialize in compiling weather statistics and numbers do not lie: 2012 was not the worst summer St. Louis has ever have.

Can we weep now? Wasn't all our suffering these past few months worth something?

Those killjoys inform us that this summer was only the twenty-first driest and the fourth hottest.

However, this year did manage to set a few lesser records. This July was the hottest July ever. It really was! It didn't just feel that way.

We also had, as the weather service so dryly puts it, the most occurrences of maximum temperature greater than or equal to 105 degrees. This year, we had eleven such lovely days. We suffered one day more than our grandparents did in 1934.

We also set a new record for the number of days when the minimum temperature was greater than or equal to 85 degrees. Admittedly, this was not a hard number to beat. The previous record was one day, set in 1901 and equaled in 1936 and 2011. Still, the record now belongs to good old 2012, with two days.

But with global warming still on the march, we haven't given up hope. Watch out for 2013. We could set some real records.