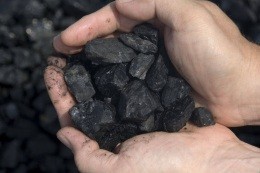 
Specifically, plaintiff Ernesto Espinoza (and "numerous" unnamed stockholders) are claiming that the company was forced to spend "tens of millions" in 2010 and 2011 on a court-ordered cleanup of selenium pollution at mines in West Virginia. However, Patriot executives failed to record that as an expense.

When the SEC questioned them about it last February, Patriot "were forced to reveal" that their net losses in 2010 and 2011 were a combined $73.3 million worse due to the cleanup than they'd originally said.

When this came to light, the company's stock began to fall from $5.53 on May 8 all the way down to $2.18 on May 22, despite an "upbeat" letter from Whiting to investors in that period.

Then the company filed for Chapter 11 bankruptcy on July 9, and the share price fell further to $0.61 that same day. (It's now trading at 13 cents).

Patriot has yet to file an answer to the complaint, which you can read below.
Espinoza v. Whiting and Schroeder

Speaking of Bidness, See You In Court!