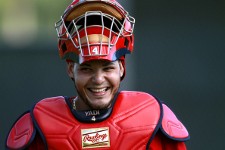 Yesterday afternoon, the Rawlings Gold Glove award winners were announced, and the St. Louis Cardinals managed only one winner from their 2012 squad. Yadier Molina, catcher extraordinaire, was that lone honoree, as the Redbird backstop nabbed his fifth consecutive award.
It was, quite possibly, the least surprising of any of the selections, with the possible exception of Mark Buehrle as the National League winner at pitcher. (Buehrle should probably just win the award for the rest of time, regardless of whether he's playing or not, on the strength of his magic play from Opening Day 2010 alone.) There were the usual terrible selections based on reputation rather than current ability, and the usual terrible selections based on offensive prowess rather than defensive merit.
Molina was neither of those things.
Actually, I suppose I should be a little careful about saying Molina was neither of those things, since he managed to combine both an outstanding reputation and a bat that was, in 2012 at least, among the best at his position, so the selection probably hinged somewhat on both of those aspects. Rather, what I mean to say is that in no way was Molina an undeserving winner of the award, winning on the strength of his bat or reputation while his current glove doesn't merit this kind of honor. Molina winning was probably the easiest selection of any winner this year; he absolutely should have been the easiest selection.
Molina probably won't be in the top three for the Most Valuable Player award voting this year, the way it looked like he might be for awhile. His offense hit a remarkable new high this season, but he just isn't ever going to put up the kind of gaudy numbers that grab the attention of selection committees everywhere. Still, he's now picked up a fifth straight Gold Glove, won the Fielding Bible award last week (which has, you know, actual evidence behind it), and, if the world be just, should win his second consecutive Platinum Glove award soon. (The Platinum Glove is given by Rawlings to the best defensive player in the league, regardless of position.) There are plenty of very, very good defenders throughout the National League, but Molina is simply head and shoulders above all of them.
In fact, I'll go so far as to say there is no other player in baseball who makes such an impact defensively as Yadi. I've long been a bit of an agnostic on catcher defense; show me a player who actually turns balls in play into outs and I'll be willing to slap a value on that. Defense at the catcher position is just so...nebulous, you know? I have a hard time buying into a hard valuation of it, which makes it -- in my mind, at least -- tough to really believe in. But the deeper the smart guys of baseball dig in to the subject of catcher defense, the better Yadier looks. You can watch him and easily appreciate the quality, but the full measure of his brilliance is only beginning to be understood.
This fifth Gold Glove for Yadi pushes him even further into historic company, with only five catchers in MLB history having as many such awards as Molina. He still has a long way to go to catch Ivan Rodriguez, the all time leader with thirteen; I kind of doubt Yadi will get there, honestly, just because I'm unsure he'll have that kind of longevity. Nonetheless, the fact is that Molina is as good as I've ever seen behind the plate, and plenty of much, much smarter people than I have posited he's as good as there has ever been, period. I'm certainly in no position to argue with that.