Initially the St. Louis County Police Department would only provide a heavily redacted version of the report. Today the department released the document in its entirety, and we're fixin' to follow suit. 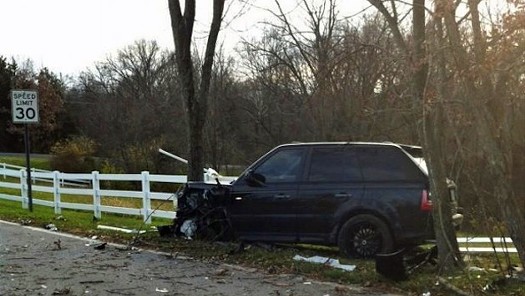 Seemingly about the same time @Tullman24 was uploading his photo, another St. Louis-area Twitterer, @RickyBobby222, was in full chirp.

@kenny_wallace apparently David freese was in a bad car accident. Said he may have been driving drunk you seen anything?


That carefully worded revelation, posted at 8:05 p.m. Thanksgiving night, was followed minutes later by a similar one minus the "apparently" and an hour later by a far more declarative update: "freese was in a drunk driving accident. A kid we used to work with freese almost hit his cousin. When she went [...] to check on the driver it was freese. All his baseball gear was in the car"

Though there was some initial confusion on the part of @RickyBobby222 about which direction his former coworker's cousin was traveling, by the next day he was convinced that Freese was speeding and nearly rear-ended the woman, identified in the tweets as "Megan," that the third baseman had plowed into a tree while trying to avoid the otherwise imminent collision that no deer were involved and that any news reports to the contrary that were beginning to filter out were evidence of "a coverup."

On Monday, blogger Ray DeRousse published a lengthy post on his site STL Cardinal Baseball, citing "odd and troubling bits of information" in the StlToday.com story that either conflicted with observations made by eyewitnesses or indicated that Freese and/or the Cardinals organization were dealing irresponsibly with what might have been a serious injury to a multimillion-dollar ballplayer. In laying out his arguments, DeRousse made extensive use of @RickyBobby222's assertions and the version of events said to have been described by "Megan."

"More curious is the detail [supplied by @RickyBobby222] following the accident after police arrived:
Once the cops got there, she was forced to leave and the police won't release the reports to [the Post-Dispatch].
At the very least, something very odd is going on with this accident and the handling of it."


Now, of course, we have the report, and it seems reasonably clear that:

2) despite what's making the rounds on the Internet, police at the scene of the accident were so certain that alcohol was not a factor that they both documented that conclusion and, unbidden by reporters or anybody else, stated it to the media.

Which brings us to another conspicuous cadre of Internet know-it-alls: The Post-Dispatch haters who while away their hours on StlToday.com comments threads.

Michael Avenevoli, who opines: What a terrible article! He had an accident trying to avoide a deer on a super windy road with no shoulder and the Post has to bring up the fact that he has had alleged incidents in the past that involve alcohol. I see absolutely no connection and am embarrased for the Post to even write such a terrible article. Stick to the facts of what happened if you want to write an article and don't put alleged incidents in that have no connection in what happened.

Or Thomas True: Well, it seems to be the way of the Post-Dispatch. I live in what was St. George and no matter what the story, good bad or whatever, the P-D had to bring up ever single bad thing that had ever happened as if it had anything to do with the present. It is just lazy journalism and helps to create an image they wish to promote.

Or Kathy Kohler Schwartz: So let me get this straight. Because an individual, who happens to be a public figure, supposedly has a history of DWI we automatically assume this was an alleged case as well? I believe the Post should stick with the facts or look over their shoulder for karma to take its course.

Or Dorothy McKanna: Perhaps one day we'll be given ALL the real life stories on ALL reporters. What things have been covered up, who they slept with, lies they've told etc. What a book that might make.

And Rich Thompson: Go to the Missouri Bar & Grill around midnight and you'll find some of the writing staff drunk, including the sports department. They don't take cabs home either. Fair is fair.

Oh, and Lindy Ill: My advice to all you who are rightly ticked off by this poor excuse for a journalistic article: The "reporter's name is Joel Currier. His email and PD phone number is listed at the top of the article. Don't just write comments here: EMAIL AND CALL JOEL CURRIER! Demand that the PD immediately cease and desist from every opportunity of tarnishing David Freese's reputation! Let Joel Currier and HIS BOSSES know that this type of pseudo-journalsim will not be tolerated by readers--or we will CEASE subscribing to, or even reading online a single word this paper ever prints again! Let's put our money where our mouths are!

To be fair, not all conspiracy theorists believe the Post-Dispatch is part of the conspiracy. Many of this faction can be found on the website's Cards Talk forum. Venture there at your own risk.
Or click through for the accident report...