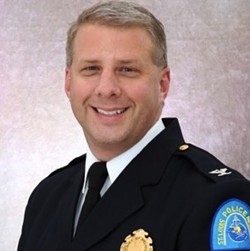 The City of St. Louis has a new police chief -- and he says gun control will be one of his top priorities.

Officially sworn in on Thursday night, Police Chief Sam Dotson tells Daily RFT that the time has come to crack down on illegal handguns.

"As a society, we have to be serious about gun control," Dotson says.

And what does he think of the many pro-gun proposals floating around in the Missouri legislature?

"I understand the Second Amendment, and I understand everyone's right, or their belief that they have a right to bear arms," he says. "It doesn't give them a right to use that weapon." 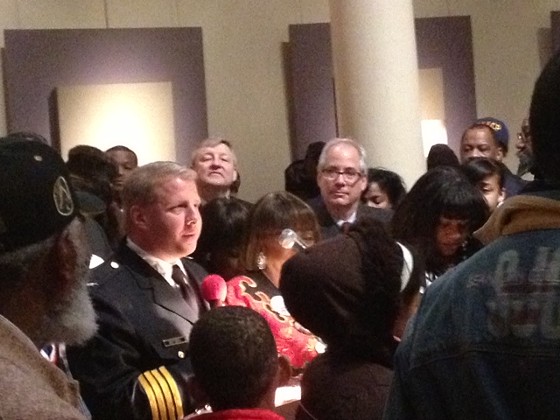 We spoke with Dotson after he made a short speech at a recent Martin Luther King Jr. event. Dotson has since been officially sworn in, replacing Chief Dan Isom, who took a job with the University of Missouri St. Louis.

In the last two months, there have been increasingly contentious debates around guns locally and nationally, in the wake of the tragic elementary school shooting in Connecticut that left twenty children dead in December.

In Missouri, there has been a wide range of anti-gun control legislation introduced, notably a proposal from Representative Casey Guernsey to block any federal measures.

Meanwhile in the City of St. Louis, a January 15 shooting at the Stevens Institute of Business and Arts became one of the first major incidents of gun violence Dotson had to respond to.

"That's the call that no police chief ever wants to hear -- that there's an active shooter inside a school," says Dotson.

The suspect Sean Johnson was a student and the victim, Greg Elsenrath, the school's financial aid director, is expected to make a full recovery.

"The problem is illegal guns in the hands of criminals," says Dotson. "The problem is all too often a legal gun becomes an illegal gun, because it's taken.... It's stolen from a car. And as a police chief, more guns is never the answer."

Continue for more of our interview with Police Chief Sam Dotson.