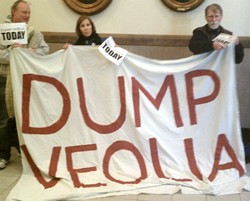 Amid murmurs from the staff in Mayor Francis Slay's office that the Veolia Water contract "isn't even on the agenda," about 80 members of the activist coalition Dump Veolia poured into Room 200 yesterday afternoon.

The goal -- as their signs read -- was that the Board of Estimates and Apportionment would "Dump Veolia Today."

Aldermanic President Lewis Reed certainly tried to oblige them, bickering with Mayor Francis Slay over whether he could properly make a motion to send the contract back to the original selection committee.

"Sending it back to the committee is not going to make a difference," Slay returned.

The meeting came just hours after Slay's office issued a statement declaring that because of public opposition, the contract is on an indefinite hold. As we explained in our Feb. 7 feature story, the pending deal between Veolia and the city's water division has stirred up a passionate public outcry from labor, human rights, and environmental activists. A petition demanding St. Louis reject the contract has gathered about 2,800 signatures.

After Reed, who is running for mayor against Slay, made an unsupported motion to send the contract back to the committee -- an idea already floated by his chief of staff last Friday -- the aldermanic president tried to call for a special E&A meeting for next week. When that was unsuccessful, he asked the mayor to commit to leaving the deal off the table until public hearings can take place.

In one particularly awkward moment, Reed insisted Slay "look to your right" as thirty fluttering "Dump Veolia Today" signs rose in the air.

The gestures were ultimately unsuccessful, as Reed's motions did not garner the tie-breaking votes of Comptroller Darlene Green. Slay reiterated that his staff is meeting with all opposition groups and that he wants the solution to come after public hearings.

After the expected heated exchange between the rival candidates in the mayor's race, the meeting was adjourned without action on the contract.

Alderwoman Dionne Flowers attended the packed meeting, saying she was there as the chair of the Board of Aldermen's Public Utilities Committee. Not long after the room emptied out, she sent the following tweet:

I will be sponsoring a resolution and hold hearings on the proposed Veolia consulting contract with Water dept as Chairman of Pub. Utilities

It appears, at least for now, that the contract's fate will remain in limbo for months, as opposed to the swift death activists were hoping for. It will also likely come long after the voters have chosen their next mayor.