Salem Library Told to Stop Wiccan Censorship: "We Are Pleased This Matter is Behind Us" 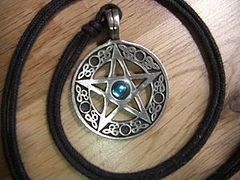 Public library officials in Salem are pleased with a court order against them this week that says they cannot block Wiccan and Native American websites -- after the American Civil Liberties Union of Eastern Missouri accused them of refusing to allow a patron to conduct online research on certain religions.

"We are pleased this matter is behind us and that the public library and its employees can again focus its resources and revenues solely to the purpose of serving its patrons," Glenda Wofford, director of the library, says in a statement sent to Daily RFT.

After the ACLU promoted the court decision this week, the library responded with a fairly lengthy statement -- that does little to address the fight over free speech and censorship.

As we reported on Wednesday, the court's order from Judge Richard Webber, says that the library is not allowed to maintain any sort of Internet filters that block access to sties, other than the basic pornography and virus filters.

The woman who brought the case forward with the ACLU, Anaka Hunter, a Salem resident, claimed that she protested to Wofford about blocked access to websites about Native American religions and Wiccan faith -- and that while some were unblocked, much was still censored.

"Wofford said she would only allow access to blocked sites if she felt patrons had a legitimate reason to view the content and added that she had an obligation to report people who wanted to view these sites to the authorities," the ACLU says. "The resident's attempts to complain about the policy to the library board of trustees were brushed off."

The library, however, in its new statement, argues that the decision "requires the library to do nothing different than it had been doing for several months prior to the time Anaka Hunter filed her unnecessary lawsuit."

The library has also focused its attention on questions of whether the library would have to pay attorney's fees and costs associated with the action -- noting that her lawyers dropped this request, which the library says held up this case for several months.

The official judgment, on view below, does note that changes were made prior to the filing of the lawsuit, such that patrons did have access to the websites in question in the litigation. Still, the order makes clear that the library cannot ban these sites or reactivate the filters that started the whole controversy.

"The Salem Public Library and its Director were very pleased with the court's judgment," the library says in its statement. "By agreeing to the consent judgment, the Salem Public Library does nothing more than agree to continue to use the new updated categories recommended by its service provider and adopted by the library before the suit was filed."

Continue for the full statement and judge's order.

Tags: Follow That Story, Gettin' All Religious Up in Here, Image

Speaking of Follow That Story, Gettin' All Religious Up In Here