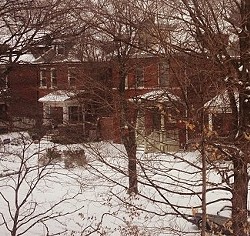 With nothing to do but stay inside and wish there was more food in your fridge, Missourians across the state took to Twitter to vent about just how awful and confusing the climate in the Show-Me state is and just how incredibly cruel the weather gods are to give us this horrible snow on the first weekend of spring -- for some a messy, yucky, frigid end to a spring break that, just a few days ago, seemed so nice!

Daily RFT, also stuck inside, decided to collect the top Tweets from those declaring their official hatred for Missouri or their realizations that Mother Nature is really losing it these days. We feel your pain.

20. Mother Nature is on crack.

Mother Nature-Oh it's baseball season in Missouri? Here's all the snow you didn't get this winter.#MotherNatureIsDrunk

Dear stupid Missouri snow,I HATE you. you should never fall out of the sky in march. Dec.-Feb. is fine! Feb. is my limit though!

17. Time to leave this state behind!