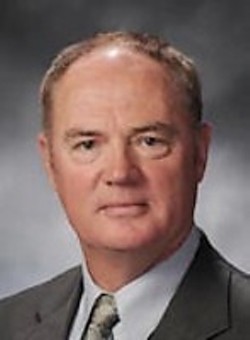 Buried in a CBS St. Louis story on the local impact of the Federal Affordable Care Act, or Obamacare, is a rather bizarre quote from Representative Paul Fitzwater, a Republican from Potosi, which is coming under fire.

Fitzwater was being interviewed about a study which found that 525,000 Missourians will be eligible for healthcare premium tax credits when some of the biggest provisions included in the Affordable Care Act go into effect in January 2014. The article prefaces his comments by saying that Fitzwater is not opposed to tax credits, but thinks that Obamacare as a whole is bad for the country.

And then he made a little analogy which...he might want to clarify.

Fitzwater particularly opposes the expansion of Medicaid as laid out in the federal law, saying it ought to be reformed rather than expanded. Then he gave this little gem of a quote:

Fitzwater said Americans can become too dependent on government funds.

"When you go to the zoo, there's a sign that says please don't feed the animals," Fitzwater said. "There's a reason, because they keep coming back."

Setting aside the fact that the analogy doesn't really stand up to logical scrutiny (we didn't think the animals could come back because, you know, they're in a zoo), the representative's words are not sitting well with labor leaders and other progressive advocates:

Daily RFT put in a call to Fitzwater's office to see if he'd like to amend his sentiment. We'll update if we hear back.