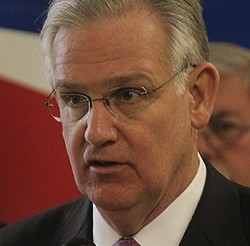 The attorneys for a Missouri man accused of murdering his neighbor more than two decades ago are seeking testimony from the man who was attorney general back in 1993 -- who just so happens to be the current governor, Jay Nixon.

"I wouldn't be doing my job for my client if I didn't try to do this," Robert Ramsey, attorney for Mark Woodworth, suspect in the 1990 murder, tells Daily RFT.

Ramsey says that while Nixon wasn't directly involved in the prosecution of this case twenty years ago, his testimony could be revealing.

Will the governor cooperate?

First, a recap of the latest developments in this long, drawn-out case centered on accusations that Woodworth, now 38, killed his neighbor Cathy Robertson and wounded her husband Lyndel Robertson in November of 1990.

Woodworth, from Chillicothe, has always maintained his innocence and was released from jail earlier this year after the Missouri Supreme Court overturned his conviction. And last week, the Post-Dispatch reports, Platte County Circuit Judge Owens Lee Hull Jr. said there was "egregious, flagrant, cavalier disregard for evidentiary procedures and processes" in the prosecution's case against Woodworth -- with a new ruling that key evidence around the weapon and bullets in the crime cannot be used going forward.

The attorney general's office has filed an appeal to that latest ruling -- and Woodworth's attorneys are now looking to take the deposition of Nixon in preparation for a third trial in his murder case. A spokeswoman for the attorney general tells Daily RFT the office has no further comment beyond the notice of appeal, which is on full view below. Woodworth's attorneys have argued that evidence, including the handgun and bullets in the case, may have been tampered and improperly transferred. The A.G.'s office is pushing to overturn the decision to suppress this critical evidence.

What do Woodworth's attorneys want from the governor?

Continue for more on the defense's request and the attorney general's appeal efforts.

The notice of intent to take Nixon's deposition, full document below, says that the defense would like to tape the governor's testimony and touch upon a range of topics, including his discussions with Kenny Hulshof, the prosecuting attorney who originally handled the case, as well as his discussions with Judge Kenneth Lewis.

"Mr. Nixon was present and presumably participated to some degree," Ramsey tells us.

The overturned conviction earlier this year was based in part on letters exchanged between Judge Lewis, Lyndel Robertson (the husband of the victim) and the prosecutors -- which were reportedly not shared with the defense.

Ramsey wants to question Nixon about these letters, as well.

Asked about the latest appeal of the attorney general, Ramsey, citing the court's recent ruling, says, "By going so far in defending the actions that have been described as...["egregious, flagrant, cavalier disregard for evidentiary procedures and processes"], they are, if they haven't already become complicit, certainly bordering on it."

If the state doesn't respond to the Nixon deposition, Woodworth's attorneys will take a different route, he adds.

"If they don't volunteer to produce him for a deposition, we'll probably...have to select a date ourselves and subpoena him," Ramsey says.

The request lists this Thursday as the response deadline before they issue a subpoena.

Nixon's office did not respond to a request for comment from Daily RFT's office (but in the P-D, deferred comment to the attorney general's office, anyway).

Here's the defense's notice of intent to take Nixon's deposition.

Notice of Intent to Take Deposition

And here's the latest notice of appeal from the attorney general's office.