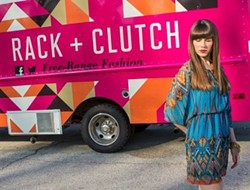 It's like a food truck -- only instead of selling food, Rack + Clutch sells jewelry, accessories and clothing on the streets of St. Louis.

The only challenge for this brand-new "fashion truck," which seems to be the first of its kind in the region, is that there's no established license process in St. Louis for this line of work, which means that -- despite the owner's efforts to get proper approvals -- Rack + Clutch for now is constantly at risk of city officials shutting it down.

"The ordinances don't allow for anything like this," Emily Ponath, owner of Rack + Clutch, tells Daily RFT. "People are totally loving it, but the city was hating on me."

Ponath says she was especially frustrated when she heard that Mayor Francis Slay had referred to the "fashion truck and its mobile sisters" as "pirates."

Ponath, a 31-year-old Shrewsbury resident, explains to us that she's been doing her best to contact the city and get the permits she needs to operate her truck, which she officially opened last week and has been out for just four days.

"I'm paying taxes," she says, noting that she does have a vehicle vendor license.

That license, however, does not allow to her to park and sell on public streets, which poses a significant obstacle to her business plan.

And she can't get a food truck permit either, because it doesn't apply to her business.

"I'm not a food truck. And I'm not stationary," she says. "I started a mobile boutique. It's a fashion truck -- like a food truck, but with clothes."

On one of her first days, someone from the city told her she had to shut down.

"It's kind of stupid," she says. "There's not currently a permit offered for what I want to do. They have to change the ordinance."

Meanwhile, she and the mayor debated the matter on Twitter, and Slay eventually posted a lengthy Facebook response, which Ponath says she appreciated.

@mayorslay I just love that you want to protect brick and mortar stores yet there is a random jewelry vendor set up INSIDE CITY HALL!!!!!!!

@mayorslay Thank you for your FB post on mobile retailing yesterday. That calms me down a little.

Planning, compromise. RT @rackandclutch: @mayorslay Thank you for your FB post on mobile retailing yesterday. That calms me down a little.

And this morning, Slay tweeted:

Retail from fancy trucks. The City supports it where neighbors want it and it treats other retailers fairly. #fgs

The city's argument is that mobile boutiques constitute uncharted territory in St. Louis and that officials need to come up with a fair, reasonable way to license and permit these merchants -- much like they did with food trucks, which are pretty new in the city.

The city says that it's important to have a clear permitting process for these businesses so that they pay their fair share and don't unfairly hurt brick and mortar businesses that sell similar goods and pay taxes and other costs associated with their locations.

Slay, in his message, says he is a committed to finding a compromise.

Continue for more on the fashion truck and Mayor Francis Slay's response.

Slay writes in his response (full statement on view below):

After months of back and forth, food trucks generally abide by an enforceable set of rules outlining everything from food safety regulations to where and for how long they can park. They are welcome in some neighborhoods, but not in others. They are licensed and pay taxes.

The fashion truck and its mobile sisters are pirates for now, but I am confident we can figure this out fairly, too.

He argues that it took "patience" and "compromise" to establish a process for food trucks, which, he says "have found a home in parts of the city." Slay says he also recognizes that "food trucks are just the tip of the iceberg for contemporary mobile retailing."

Ponath recognizes that this is new, too, which is why she says she had the idea in the first place to bring this to St. Louis and the Midwest.

She previously worked at a store in the Central West End, but business was slow due to low foot traffic, Ponath says.

"I was interested in opening my own store," she adds, "but once I started looking into that, the costs were just really high for brick-and-mortar."

She says she had heard of mobile boutiques on the east and west coasts and decided she'd give it a try here.

Aside from her difficulties with the city, it's going very well, she adds.

"It's affordable for everyone," she says, noting that most items are under $50 and everything is under $100. "Everybody loves it so far."

She says that she's already made $11,000 in just four days of business.

For now, she is posting her locations on Twitter and Facebook and she says she plans to stick to spots that are private property -- which are currently allowed -- until she sorts out licenses with the city.

Here's the full response from the mayor, followed by more photos.

With patience, compromise, and a mayoral staffer who liked burritos, food trucks - I mean the sort of brightly painted mobile kitchens that now pop up on street corners during lunch and after concerts - have found a home in parts of the city. The patience was important because not everyone (including their brick-and-mortar competitors, health officials, and motorists competing for parking) initially welcomed them. But, a staffer working mostly on her own negotiated enough compromises among the interested parties to allow a fleet of such trucks to try to find customers here without too much hassle.

Food trucks are just the tip of the iceberg for contemporary mobile retailing. In California, you can buy fancy flowers, designer shoes, and pschool supplies; get a haircut; or play video games - all from a truck. And such trends flow east. Just this past week, a stylish staffer asked for permission to see how a local truck that sells fashionable clothing could operate without too much interference on city streets.

My answer: yes, but remember that the road traveled by the burritos was a bumpy one at first.

We need to find out a way to license mobile boutiques - or florists, stylists, or anythingelseists - that does not put brick and mortar stores, who have already made substantial investments in their neighborhoods, at a disadvantage. We will also need to identify neighborhoods that will welcome them. And we will need to satisfy the revenue collectors and law enforcers.

After months of back and forth, food trucks generally abide by an enforceable set of rules outlining everything from food safety regulations to where and for how long they can park. They are welcome in some neighborhoods, but not in others. They are licensed and pay taxes.

The fashion truck and its mobile sisters are pirates for now, but I am confident we can figure this out fairly, too.

Continue for more photos of the new fashion truck.