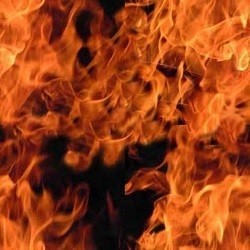 The suspect, a 22-year-old male from the nearby eastern Missouri town of Bismarck, checked himself into Barnes-Jewish Hospital in St. Louis last week and is undergoing treatment for severe burns to his face and arms.

Lieutenant Jeff Crites with the Farmington Police Department tells Daily RFT that a witness observed a "nude man running down the street" immediately following an explosion that rocked an apartment building around 5 a.m. on May 1. The man's clothes lay burning on the sidewalk.

The suspect could not be found when police and fire officials arrived on the scene. Now authorities believe that the naked man and another suspect were cooking meth in the apartment when it caught fire. No one else residing in the apartment building was injured.

Police hope to apprehend and interview the second suspect before sending the case to county prosecutors. St. Francois County is one of the most active regions in the state for meth labs, according to figures from the Missouri Highway Patrol. Last year, authorities seized 71 meth labs in the county, ranking it as the seventh most active county for meth labs.

Farmington is also one of several dozen Missouri towns that have banned the over-the-counter sales of pseudoephedrine -- the key ingredient to making methamphetamine. Yet, Crites says, the drug remains a concern, with drug cooks able to purchase Sudafed and other pseudoephedrine sources in other municipalities and bring it into Farmington.

"It kind of ebbs and flows," says Crites of the meth labs. "I was here when meth first hit. The first round of meth cooks have served their time and now they're back. Meanwhile, a second generation of cooks cropped up and now many of them are doing time."