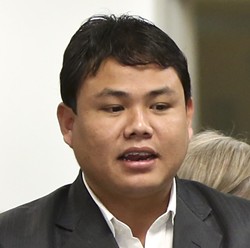 For nineteen years, Mon Rai, a 29-year-old immigrant in St. Louis, lived under terrible conditions at a refugee camp in Nepal.

"It was such a miserable life. We didn't have sufficient food to eat, no sanitation program, no good health services," Rai wrote in an essay last year. "It was like a hell."

In September of 2012, he finally immigrated to the United States with the hope of starting a new life for him and his family. But early Monday morning, Rai, who has been working as a clerk at 7-Eleven to provide for his pregnant wife and son, was shot to death by an unknown suspect.

Daily RFT has since obtained a copy of a personal essay he wrote last year, on view below, which underscores just how tragic his death is.

Rai was shot and killed inside the 7-Eleven on Gravois Avenue yesterday just after midnight. A customer found him bleeding to death, police say.

This homicide comes just weeks after a Bosnian immigrant named Haris Gogic, nineteen, was shot and killed inside his St. Louis convenience store.

Rai immigrated to Missouri with sponsorship from the International Institute of St. Louis, which offers adjustment services for refugees and immigrants. He was taking the institute's highest-level English class and the staff yesterday told us he was not only an exceptional learner, but also a positive, eager immigrant determined to succeed here.

His wife is expecting their second child this week.

Since publishing our story, we received a copy of an essay he wrote for a Thanksgiving program at the institute, which offers a first-person account of the hardships he faced in Bhutan and Nepal -- and the hope he had for the move to America.

"When I came to St. Louis, Missouri in the United States, my heart was full of hopes and dreams," he writes in the essay. 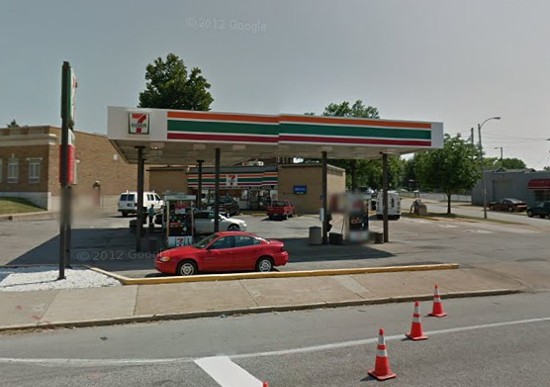 Readers interested in donating to Rai's family can write checks payable to the "Mon Rai Fund" at:

(Other locations of the bank here).

Here's the full transcribed essay, followed by a photocopy of the handwritten document, courtesy of the institute:

"MY JOURNEY FROM BHUTAN, NEPAL AND U.S."

I was born in Bhutan January 1, 1984. I studied there up to 1st grade. Then due to the political situation, we were compelled to leave our country. So we went to Nepal in February 1993. We lived there for 19 years as refugees in the camp. It was such a miserable life. We didn't have sufficient food to eat, no sanitation program, no good health services. It was like a hell. We didn't have citizenship or good jobs. We raised our voices to the government to return us to our home country but it was all in vain. So at last IOM (International Organization for Migration) helps us to resettle in the United States.

So I decided to leave the refugee camp in order to have a good life and jobs in the United States. I decided to leave in 2008 but due to some problems our process was suspended. I was disappointed. It was a difficult task to make good decision in a short amount of time. It was difficult to arrange to leave. It was difficult journey from our country to the United States. We had to make transfers in different countries. Finally, we arrived at our destination in St. Louis. I hoped it would be a better life than in the refugee camp in Nepal.

When I came to St. Louis, Missouri in the United States, my heart was full of hopes and dreams. I was so excited when I arrived at the St. Louis airport. My relatives and social worker from the International Institute were there to receive us. I was so delighted. The social workers from the International Institue were so friendly and I was so impressed with them. Now I have to face different problems, like language and culture.

The International Institute was helping us to overcome our problems. They also provided us food, shelter, money, health services, job readiness and English language classes. It helped us adjust to the new environment. Now, I am ready for jobs, and to face the problems by myself. I learned the English language and the history about the United States.

Now, I am searching for jobs. This has been the most challenging thing for me in the United States, as well as learning the routes to get to different places. We have a good apartment to live in, a car for transportation, and citizenship in the United States. I will be a good citizen and help those who are in need of help. I want to give thanks to the people (IOM) who helped us settle in the United States, and the International Institute for good assistance.

Here's a handwritten copy of that letter.