One month ago, Larry Conners' long gig as an anchor for KMOV-TV (Channel 4) came to an end when his bosses fired him over a controversial Facebook post questioning whether the IRS was harassing him in retaliation for his reporting. Since his termination, he has brought forward a complaint against the station -- and also has relaunched a public Facebook page where he freely writes about a range of topics.

Which brings us to his latest update published at 8:44 p.m. last night, which begins, "CONNERS BACK ON CHANNEL 4??"

Don't get too excited, y'all. Conners is not back on Channel 4. But he is mulling a run for political office -- sort of.

The veteran newsman publicly weighs a run for office in Missouri in this rambly Facebook post disclosing that "a political connection" has been in touch. Could be a bit easier for him to take a stance on a political controversy if he is, well, a politician!

Conners' bosses say he was fired because he violated the journalistic standards of the station with his Facebook commentary; the veteran newsman has argued that he did no such thing and that his termination was retaliation for a past pay dispute.

The post last night on his new Facebook page (free from the shackles of corporate media bosses!) oscillates between a few short jabs at KMOV and more ruminating on the possibility of being an elected official:

CONNERS BACK ON CHANNEL 4??

Ah, got your attention.

Well, there is one thing that KMOV/Channel 4 would have to cover ... if I did it.

This week, I had a call from a political connection, and this contact said, We were discussing a political race coming up in Missouri, and your name came up. Would you be interested in running for political office?

I'm honored someone would even think I would be worthy of holding political office. If it's done right, it is a great service.

Honored, but is he ready? He does have a "BS Degree in Political Science," he notes.

He writes that he cannot disclose this caller or "which state office was being discussed." But, he says, "My response to the caller was: I am truly humbled to be asked, but I will have to pass."

Of course, as I said in the beginning ... if I did run for political office, KMOV/Channel 4 would have to run stories on me ... even put me on the air ... interview me. Hmmm, I'm sure there might be some tough questions ... trying to find some skeletons in my closet. But contrary to some politicians, I would welcome the opportunity to answer such questions.

Should I change my mind ... and take up the offer?

Nah, it would be wrong. But I do wonder what KMOV would say to callers asking: Is Larry Conners running for political office and are you covering him?

Conners closes with this quote, which, it appears from the comments, has left his Facebook fans with some hope that he may still take this secret source up on the offer and make a go for public office: "It is useless to hold a person to anything he says while he's in love, drunk, or running for office."

Here are the first ten commenters who are all very supportive of the idea even if Conners is not so sold: 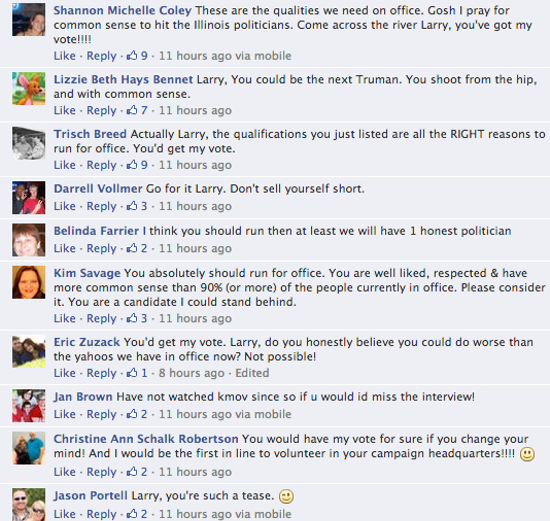 So far, the status has about 50 comments and on quick glance, they are all potential future campaign volunteers. And who knows, maybe he'll make a run for president. After all, his Facebook name is now Larryconnersusa and his Twitter is @LarryConnersUSA!