Delmar Loop Gets Traffic Roundabout -- Or Is It a Drunk-Driving Obstacle Course? 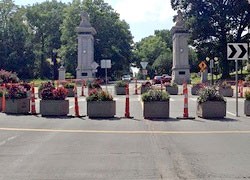 In a move to curb alcohol-related fatalities on Delmar Boulevard's western reaches, University City has installed an obstacle course just west of its bar-friendly "Loop" commercial strip -- and conveniently near the HQ of the burb's po-po. According to a city source close to the project, the town's first ever "roundabout" -- apparently named after the equally confusing song by '70s prog-rockers Yes -- functions as a concrete virtual breathalyzer as county-dwelling imbibers make their way home from their favorite watering holes.

"We've found that anyone under .08 BAC should be able to negotiate it without much of a problem," our source says.

He continues, "Our testing also shows that anyone from .08 to 1.0 probably ain't gonna hit nothing but will need three or four circumnavigations to emerge from the far side. 1.0 through 1.5, look out lion's gate. Anything over 1.5, my bet is they're probably gonna plow right into the motherfucker and total their ride on a cement flower planter."

One Olivette resident whom we found enjoying a Delirium Tremens at popular Loop destination Three Kings observes, "I couldn't hardly find my way into the Loop through that goddamn thing. Fuck if I know how I'm gonna find my way back after a couple more of these. Maybe I'll just make a right on Kingsland and take Olive home."

Note to self. Stay off Olive.