Cardinals Security Kicks Out Fan on Star Wars Night... For Having Stormtrooper Mask? 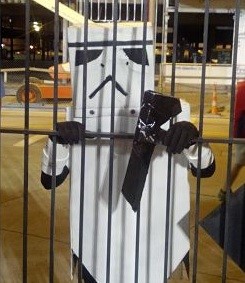 Most Jedi and Sith enjoyed the first-ever Star Wars night at Busch Stadium yesterday, but one woman felt like she was being oppressed by Palpatine's Galactic Empire when she was kicked out of the stadium for wearing a mask.

Julie Sweetin, a nurse at a local hospital, spent two hours crafting her Stormtrooper costume to wear during the St. Louis Cardinals' special themed game against the Los Angeles Dodgers. With black leggings, white body "armor" and a square cardboard mask, she looked like an 8-bit member of Palpatine's army.

As Sweetin entered the stadium, however, ticket-takers cited a no-mask policy and asked her not to sport the headwear.

"I was asked to remove the mask when I came in, and I did," Sweetin told Daily RFT at the stadium.

Sweetin said that she complied with the request until RFT photographer Jon Gitchoff asked to take a photo of her in the fourth inning. Sweetin put on the mask for a few seconds as Gitchoff snapped the pic and chatted with her friends, but a polo-clad security guard rushed over to snatch Sweetin's mask from her. Sweetin and Gitchoff calmly tried to explain that she wore the mask only for a brief photo as other fans had done, but the guard wouldn't yield and began yelling at Sweetin and her friends as if she were threatening to blow up Alderaan.

"Today is my thirtieth birthday," said Danny Curtin, who had accompanied Sweetin to the game. "But now my birthday is ruined."

As another security guard came over to assist, Sweetin and Gitchoff pointed out that other fans were sporting masks without incident, and that not all guards were enforcing the alleged no-mask policy. The guards repeatedly argued that policy was policy no matter what others were doing, and Sweetin coolly asked to speak with a manager and stepped to the side to wait.

"That one employee just went off on us," Sweetin said. "I didn't appreciate how he dealt with us."

During the fifth inning, a supervisor quietly chatted with Sweetin for about ten minutes before Sweetin was in fact forced to leave the stadium, mask in hand. When Daily RFT followed Sweetin outside, she said that the supervisor was very understanding about the situation and had hinted that this particular guard did not always keep his cool. Sweetin, who, at about 5'9", was not "a little short for a Stormtrooper," appreciated that the Cardinals would hold a Star Wars night but expressed displeasure about the inconsistent mask policy.

"They shouldn't have these theme nights if this is how they're going to treat people who dress up," Sweetin said. "That guy's attitude isn't going to get him anywhere."

Daily RFT reached out to the Cardinals for comment, and we'll update if we hear back.