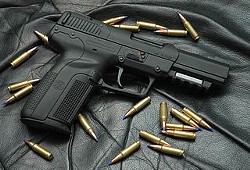 Akeem Mayes, a nineteen-year-old north St. Louis resident, was pronounced dead yesterday after police located him on the doorstep of a Hanley Hills residence in north county.

Police say he showed up to a home on the 5700 block of Eagle Drive with another individual at around 10:30 a.m. The two knocked on the door, the report says, and became engaged in a dispute with the resident of that home who was there with his fiancé.

It's unclear who was armed and who fired shots, but there was an "exchange of gunfire," police say -- and the bullet that hit Mayes was fatal. He died on the scene, officials say.

As of this writing, police are classifying the shooting as a homicide, though no one has been charged yet.

The second subject -- who showed up to the home with Mayes -- remains at large.

Officer Randy Vaughn, a spokesman for the county police department, tells Daily RFT that the authorities aren't certain yet who fired the fatal shot, adding, "The only story that we have is from one person that exchanged gunfire..."

"We are still searching for the second suspect," he says.

Officers from the St. Louis County Police Department Central County Precinct responded to a shooting just after 10:30 A.M. on Monday, August 12, 2013 to the 5700 block of Eagle Drive where they found a deceased individual on the doorstep of the residence. The deceased individual was identified as:

Mayes was shot during a disturbance at the residence with the resident who was home with his fiancé when Mayes and a second individual knocked on the door. The two subjects and the resident became engaged in a disturbance, which resulted in an exchange of gunfire and Mayes being shot and killed. A search for the second subject is still ongoing. Any further information will be released when available.