Update: St. Louis Metropolitan Police officials announced late yesterday evening that they apprehended and arrested Rico Combs, the 25-year-old man suspected of murdering another man and attacking his ex-girlfriend in the presence of their children. After a brief foot pursuit, cops arrested him at the 2800 block of Victor Street in south St. Louis. Our original coverage of the incident is below.

Original post, Thursday, August 15, 4:28 p.m.: Rico Combs, 25, allegedly attacked his ex-girlfriend in front of their three young daughters on the very same day that the woman had applied for an order of protection against him.

Combs is facing charges in connection with the shooting last night in Columbus Square that left one man dead and another clinging to life. He is at large and considered armed and dangerous.

Police say Combs threw a brick window through the apartment of his ex, 23, who is the mother of their three daughters, ages three, five and seven. He charged through the glass window armed with a pistol, according to a probable cause statement, on view below.

Prosecutors say Combs and his ex were not living together and he did not have permission to be in her home.

Once inside the apartment on 1300 block of North 7th Street, at around 11:30 p.m., he fired a shot into the head and back of one man inside, who police identified as John Gorman, 27. He was pronounced dead soon after. Combs then allegedly shot another man, 25, in the face. He is currently hospitalized and in critical and unstable condition. The statement says these two men are childhood friends of the woman. 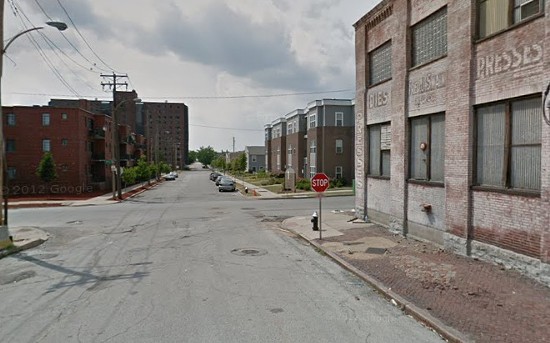 After those shootings, Combs reportedly found his ex who was hiding in a closet with their three daughters. At this point, he pressed his pistol to the woman's face while she clung to her children, the statement says.

She has a circular injury to her forehead and suffered other cuts and lacerations. It appears the children were not physically injured in the assault.

Anyone with information about his whereabouts is urged to call CrimeStoppers at 866-371-TIPS (8477). Anyone who sees the suspect should consider him armed and dangerous and should call 911 immediately, police say.

Combs, the report says, has a lengthy criminal history, including resisting arrest and assault on a law enforcement officer in the third-degree from July 19 of this year. He was charged with felony stealing in 2011 and has several charges from 2006 as well.

Here's the incident summary from police, followed by the full probable cause statement from the St. Louis Circuit Attorney's Office: