Last summer, St. Louis Metropolitan Police Sergeant Jason Love, 43, was charged with three counts of misdemeanor property damage for allegedly cutting the tires of two vehicles and breaking a business' glass door. Prosecutors at the time said he had "no legitimate reason" to cause this damage and police internal affairs recommended he be fired for violating "reasonable standards of courtesy with the public."

Love, however, argued in court that while he did cause the damage -- the incident was caught on surveillance footage -- he was justified in using a legitimate police tactic to prevent a car chase.

And now a jury has agreed, acquitting Love, who has been suspended since last fall, on all charges. Despite this decision, prosecutors are arguing that the cop should have been held accountable.

"While we respect the jury's verdict, we are disappointed with the outcome. We believe the video evidence demonstrated that Missouri law was violated by Mr. Love," Geri Dreiling, spokeswoman for the St. Louis Circuit Attorney's Office says in a statement. "While it is especially difficult to prosecute police officers, all people are accountable under the law regardless of their profession or background." 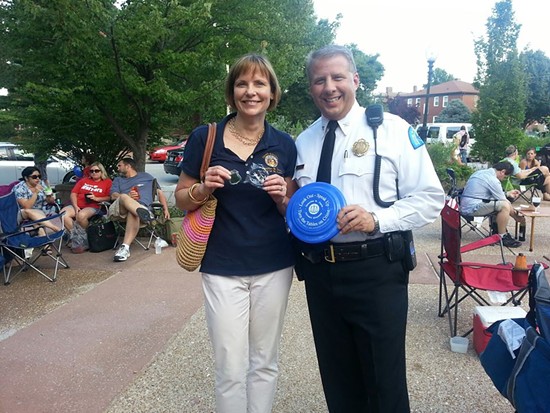 The statement from prosecutors emphasizes that criminal prosecutions against officers are very rare and says this matter is "not representative of the St. Louis Police Department."

The circuit attorney's office, however, notes that conviction rates for law enforcement officers are far lower than the rates for the general public, based on Department of Justice statistics.

"However, conviction rates should not deter prosecutors from holding someone accountable for breaking the law," Dreiling says, noting that since 2009, the office has issued eleven cases against police officers. Three resulted in guilty verdicts, four in not guilty verdicts and four are still pending.

The Post-Dispatch reports that Police Chief Sam Dotson has yet to rule on the internal affairs recommendation to fire Love.

Here's the P-D's summary of the incident, followed by the full statement from prosecutors:

The incident was captured by surveillance cameras at the business at 3400 Goodfellow Boulevard. In the video, a man can be seen walking into the business. Seconds later, Love walks up to the door and begins kicking it, shattering the glass. A few minutes later, Love can be seen standing next to the tires on a Dodge Ram pickup as another officer stands next to him, and Love appears to be touching the tire.