Jessica Becker and Kristopher Bergen never imagined they would get married at a church.

But on August 28, the St. Louis couple found themselves tying the knot inside of a church. It was, however, most definitely not a traditional church.

"This is literally the exact opposite," she says. The "Church Trap," as it's called, is in fact a breathtaking piece of art that was debuted this year at the Burning Man festival in Nevada's Black Rock Desert. When the local couple arrived at Burning Man just three days earlier, they had no idea this structure would be the site of their wedding.

"Adventure and mystery is what pulls you out to Burning Man," Bergen says. "You can go every year for ten years and it's always different and always mysterious."

"It is so amazing to see thousands and thousands of people work together," she adds. 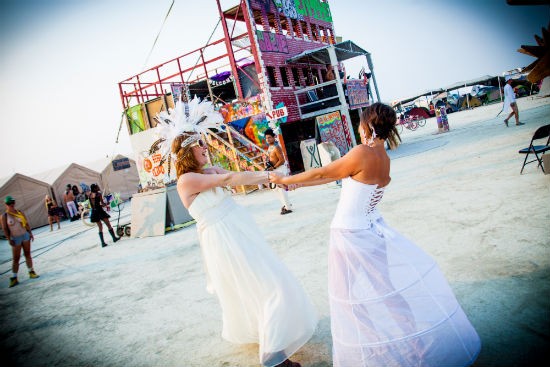 It was this energy and these qualities that made Burning Man a perfect location for their wedding, says Jessica (now) Bergen, noting that she has always loved creating art and that her husband has always loved adventure. "We've never been afraid to express ourselves and be ourselves. We are always having fun."

Kris and Jessica have been together for nearly ten years -- and engaged for four -- and had planned to get married on top of a mountain in Colorado.

But they kept running into different obstacles. And when a friend of theirs joked that they should tie the knot at Burning Man, it seemed like a great idea. 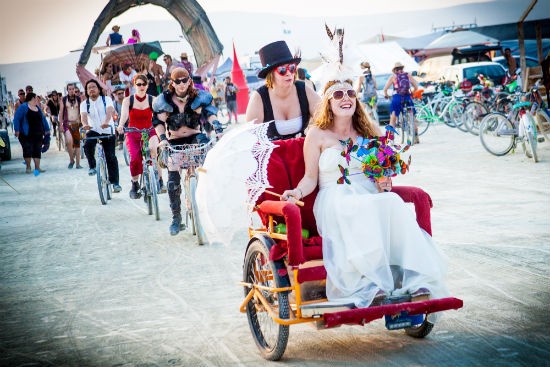 "We looked at each other and said, 'Let's just do it,'" Jessica says.

That was around six months ago.

Other than the outfits they would wear and the fact that they would be getting married, the two did not know anything else about what their wedding would be like. You can't really plan a Burning Man ceremony, she says.

"We knew from the beginning it wouldn't be your average, everyday wedding," says Jessica, 29, who manages an artists' loft building in downtown St. Louis and is from Pontoon Beach, Illinois. Kris, 32, does IT work for Washington University and is from Belleville, Illinois.

"Once we decided to do it at Burning Man, the preparation for the actual wedding was pretty simple and laid-back," she says. "All you know is you are going to get married. There's nothing much else to plan."

"It's organized chaos," she says.

Continue for more on their wedding and more photos.