Veolia Water Withdraws From Contract with City of St. Louis 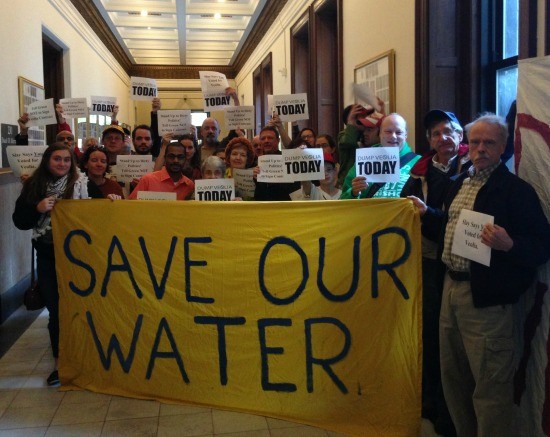 Almost a year after it became public that water-services manager Veolia won a potentially lucrative contract to work with the St. Louis Water Division, Mayor Francis Slay's office announced this morning that the French multinational company has withdrawn its proposal. This comes after months of protests, the politicization of the issue in the last mayoral campaign and, finally, the passage of board Bill 216 this morning, in which the St. Louis Board of Aldermen's Ways and Means Committee voted to strip funding for the first phase of Veolia's contract from the city budget.

"This went through an open, legal, competitive bid. It was open to the public from the very beginning," says Maggie Crane, Slay's spokeswoman. "Veolia was chosen as a contractor. Once there were concerns about what's going on halfway across the world, all the sudden it becomes a political hot potato. The whole issue was controlling the costs of the water department."

But many, including some aldermen and the activist group Dump Veolia, say that Slay's office attempted to push the bill through by circumventing the democratic process.

"We won!" read a tweet from the St. Louis Palestine Solidarity Committee, one of the lead organizations in the Dump Veolia coalition.

Before Daily RFT first broke news of the contract back in December, the $250,000 deal was on its way to a quiet approval from the Estimates and Apportionment committee, made up of Slay, Comptroller Darlene Green and Aldermanic President Lewis Reed. Activists from the group Dump Veolia began attending meetings and pressuring Reed and Green to vote no on the deal. Dump Veolia represents a number of interests, including the labor concerns of water-division workers who feared cutbacks, the Palestine Solidarity Committee which objects to Veolia's involvement in services in Israel and Palestine, and environmental concerns. We unpacked all the issues -- including the water division's need to avoid rate hikes and make major infrastructure improvements -- in our feature story "Hosed" back in February.

Later, Slay formally put the contract on hold, the protest movement grew and the city agreed to public hearings on the issue. Those hearings, held this summer, involved hours of testimony from all sides of the issue, and did not seem to promise compromise.

Early this month, Comptroller Green received a letter from the city's attorney advising her that passage of Veolia's contract was no longer subject to E&A's approval and had instead been included as a line item in the city's 2014 budget. The letter instructed her to approve the deal as a part of her "ministerial duty," explaining that the aldermen's ways and means committee approved the expenditure.

As it turned out, several aldermen strongly disagreed with this assessment, including 6th Ward Alderman Christine Ingrassia, who released this statement:

I did not vote to approve a contract with Veolia and I can't imagine any other Aldermen believes that is what happened either. It is in the best interest of the City, at this point, that Comptroller Green obtain a separate legal opinion on this issue. The constituents I represent have been heard loud and clear on this issue. They do not want to do business with Veolia. The people of St. Louis deserve better.

Last week, Alderman Terry Kennedy proposed Board Bill 216 which would strip the $250,000 for Veolia out of the budget. That measure passed this morning by a vote of 5 to 2, but it was clear that the point was moot after Mary Ellen Ponder, Slay's deputy chief of staff, addressed the committee.

"Veolia Water, the firm that was legitimately selected per ordinance, to help improve the Water Division's level of efficiency, has decided our business is not worth it," she said. "Veolia will not go forward with the contract they were legitimately awarded. Frankly, they can't be blamed."

Reactions from activists, aldermen and Slay supporters ran the gamut. Click through to view some from social media.

Veolia withdrawal is a big surprise at least to me. City will now work with MSD on water dept efficiency.

After the dust from the Veolia controversy settles, the Water Division will still need to rebuild its infrastructure. At today's hearing, it was announced that the Metropolitan Sewer District will partner with the department, and some are already asking whether MSD will then partner with Veolia to accomplish this.

For now, however, this appears to be the end of one long, crooked path for a city contract.

The full statement given by Mary Ellen Ponder:

Chairman Kennedy, members of the Committee, thank you for providing me the opportunity to speak before you this morning on behalf of the mayor.

We are faced with stark challenges in managing the City Water Division. Operational costs are increasing; we are the owners of an aging drinking water system that is several decades old - if not older in some areas - and in dire need of reinvestment; and in spite of good faith efforts, progress to address these issues have been systematically stymied.

Rate increases have already been too much. In 2008, a 19% increase. In 2009, a 14% increase. In 2010, the Water Division asked the Board of Alderman and the Mayor to approve an additional 21% increase. The Board, the Mayor, and water customers were rightfully outraged. In lieu of a much larger increase, a 12% increase was approved and the Water Division was instructed to find ways to streamline operations, maximize revenue generation, and reduce costs wherever possible, which included deferring needed capital improvements to an aging infrastructure. This was achieved, all the while maintaining our commitment to affordable and high quality water service. However, all indicators are that rates would need to increase further. The Mayor found this unacceptable without an assurance that everything possible was being done to achieve maximum efficiency in the Water Division's operations.

To ensure that every effort was being made - and in lieu of continued rate increases - over a year ago, the City issued a request for proposals to engage specific expertise to continue the Water Division's efforts to improve its operations and achieve greater efficiency. The expertise sought is very specific to water system operations and could provide insights, programs, and new ideas on how to increase efficiency, maximize revenue, and postpone or at least lessen future rate increases. Do not forget - and as I have stated before - these are dollars entrusted to the City to pay for water service. This is what we should absolutely be doing on behalf of our customers.

The selection committee - a selection committee governed by ordinance and made up of representatives from the Comptroller's Office, the President of the Board of Aldermen's Office, the Mayor's Office, and the Water Division - selected Veolia Water based on an open, competitive and legitimate bidding process. Allow me to repeat - an open, competitive and legitimate bidding process governed by ordinance - selected Veolia Water to perform this work.

At this point, the focus on citizens and the Mayor's goal to provide St. Louis with the highest quality drinking water, at the lowest possible cost became a distraction. Instead, the debate turned to political posturing, misinformation, mudslinging - in short, an ongoing campaign of scare tactics and outright lies was substituted in the place of what best served our citizens.

Over a year is lost - time that has brought us no further along in ensuring affordable and high quality drinking water. It is embarrassing and has made City Hall appear on par with the dysfunction and absurdity that has come to mark policy-making in our nation's capital. For the good of our citizens, for the good our City, for the future of St. Louis, the political theater, lingering electoral acrimony, and the advancing of agendas unrelated to City government must stop.

Unfortunately, the passage of a year has had a greater impact than just lost time. Veolia Water, the firm that was legitimately selected per ordinance, to help improve the Water Division's level of efficiency, has decided our business is not worth it. It is not worth the damage to their business. Veolia will not go forward with the contract they were legitimately awarded. Frankly, they can't be blamed.

So, we are going in a new direction. We have asked MSD, the Metropolitan St. Louis Sewer District, to work with us to identify ways to protect the quality of our water and hold water rates down. As we all know, MSD is not a water company, per say, but they do know about water, aging infrastructure and the need to provide the best possible customer service at the lowest possible cost. We should not expect the same level of expertise and service, but they have faced similar efficiency challenges over the past 10 to 15 years. It's a starting point that allows us to turn the page on the past year and to refocus on the citizens of St. Louis.

In an effort to make rate increases a last resort and to ensure any possible increases are absolutely minimized, MSD has agreed to work with the Mayor's office to address the following challenges:

1) The structure and leadership of the water division itself.

2) Concrete steps we can take in the short run to address our aging infrastructure and improve efficiency.

We must try in earnest to spare our citizens higher water rates that they cannot afford. It is time to turn the page and start focusing again on the citizens we are all supposed to serve.