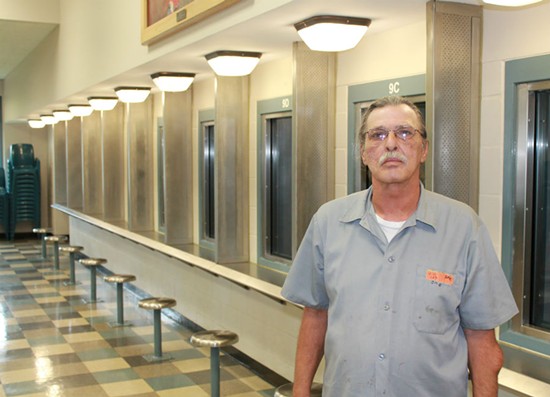 When Eric Sykes, a mass communications senior at SIUE, read the October Daily RFT story about Jeff Mizanskey, the Missouri man doing a life without parole sentence for marijuana, he thought he might have a good subject for his video documentary class. But as he delved into the project, it became more important than just a grade.

In November, Sykes made the trip from Edwardsville to the Jefferson City Correctional Center where Mizanskey has been held for nearly 20 years for an on-camera interview. He was able to speak to Mizanskey and hear his story in person. The next day, Sykes met some of Mizanskey's family. And although Sykes had never been a proponent of marijuana legalization, this experience convinced him that prohibition laws are a lost cause.

"I have never been one to support the legalization of marijuana until I heard about this case," Sykes says. "I can truthfully confess that I have never been in the same room with marijuana. Never smoked it and never will, but after meeting these people, however, I feel that we need to decriminalize marijuana. Who are we to sentence someone to die in prison because they were in possession or marijuana? This entire story is just painstakingly wrong."

Sykes' 24-minute documentary, "Here I Am," features in-person interviews with Mizanskey, his son Chris, and a town hall meeting in Sedalia, Missouri - where Mizanskey was arrested - where legalization of marijuana is discussed. The story is told solely through these interviews and viewers get to see and hear the people directly affected by Missouri's Prior and Persistent Drug Offender statute, the nation's only drug specific three-strike law that makes it possible to get a life without parole sentence for marijuana.

The title comes from a comment Mizanskey made during the interview.

"He was speaking about Governor Jay Nixon and said, '...if he really wants to help somebody, here I am,'" Sykes explains.

In November, Sykes traveled to the Jefferson City Correctional Center in November to conduct an on-camera interview with Mizanskey.

"From the moment he walked in to the moment he sat down he was well mannered, never spoke out of turn, and to me, seemed like someone who should not be in prison," Sykes says. "At one point, and I think you hear this in the documentary, he talks about how he loves to work and when he gets out he is going to get a job no matter what it is, even if it is flipping burgers. This simple statement, in my opinion, is just another reason this guy should be out among us."

Sykes adds: "I threw questions out to Jeff about Governor jay Nixon, specifically if he knew about Nixon's son getting caught with marijuana and then having the charges dropped... Jeff never spoke badly of Governor Nixon. This shows the type of character that Jeff has."

After that interview, Sykes drove to Sedalia to interview Mizanskey's son, Chris. Meeting the son of a man who had been in prison for 20 years for a nonviolent crime, Sykes thought about his own three-year-old son.

"Chris was just a teenager at the time his dad was put away in prison," Sykes says. "I started to think about my own life and how I would feel if my dad were ripped away from me or if I were ripped away from my son and wife for the rest of my life. That sort of devastation is not supposed to happen to someone who was caught with marijuana."

Sykes was never a proponent of making pot legal. It just hasn't been something that he gave much thought to. But during the process of making the documentary, including meeting Mizanskey and his son Chris in person, Sykes says that seeing what happens to families affected by drug laws made him a reluctant activist of sorts.

"This project actually has become an ongoing effort to get Governor Jay Nixon's attention to grant Jeff Mizanskey clemency. Jeff has served his time," Sykes says. Even though this is Sykes' first documentary, it has already been shared widely by people and groups advocating for Mizanskey's release. Sykes hopes that it continues to be shared and bring attention to the story.

"We cannot fall into the trap of letting the media run its course with this story," Sykes says. "This guy is in his sixties and has already served 20 years. It is time for him to live the rest of his life in peace."