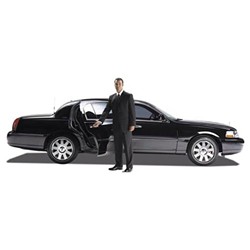 It's official. Carmel Car & Limo is live in St. Louis, offering a car and personal driver at any time of day to anyone with a smartphone.

App-based car services have spread rapidly since launching as startups in Silicon Valley, and they now serve more than 35 U.S. cities and dozens of countries. Other ride-sharing apps, including Uber and Lyft, have been peeking into the St. Louis market for months now, looking to repeat their business model: Move in, woo customers with pink mustaches and other quirks, then convince cities to let them stay by pointing to the enormous demand that springs up basically overnight.

But that didn't fly in St. Louis. And maybe it shouldn't.

When an Uber driver struck and killed a six-year-old girl in San Francisco, it raised serious questions about regulating, verifying and licensing ride-sharing drivers. Other cities are accusing the app-based services of price gouging, lack of background checks and refusing liability for injured riders.

"We embrace new and emerging transportation technologies where the power of technology is harnessed for public good -- and where operators commit to playing by the rules and within the regulations that ensure the public's safety and convenience," says Louis P. Hamilton, chairman of the St. Louis Metropolitan Taxicab Commission. "Unlike 'virtual' transport companies that operate outside normally accepted safety practices, Carmel Limousine will work within our regulations and follow our procedures to ensure everyone gets to where they are going safely."

Carmel is the first ride-sharing company to get legal registration and licensing in a U.S. city. Uber has publicly criticized St. Louis for adding hoops for its company to jump through.

"We would love to be in St. Louis, but the regulations are clearly meant to protect existing companies," said Corey Owens, head of public policy at Uber, to the St. Louis Business Journal in September. "We have plans to be in St. Louis in the future, but we haven't figured out how to do that yet because it's stacked in the favor of [taxi companies]."

Carmel follows the rules, so Carmel gets to be first.

"Our motto in general, in life, since we started 30 years ago is: 'We compete by complying,'" says Carmel Limousine CEO Avik Kabessa. "Complying is a second nature."

Want to use Carmel? Read our guide: How to Use Carmel, St. Louis' First Smartphone-Based Car Service

Speaking of Follow That Story, Planes, Trains And Automobiles