Study: Women and the State of Missouri Are Taking Lots of ADHD Meds These Days

Express Scripts, a St. Louis-based medication prescription company, has released a report saying usage of ADHD meds have risen substantially over the past few years -- and it's adult women, not young boys, who have increased their pill popping the most.

The study looks at 400,000 pharmacy claims out of 15 million patients with ages ranging between 4 and 64. The time frame was 2008 through 2012. Overall, the number of Americans using ADHD medication rose 36 percent during those four years.

People of all ages are using ADHD medication in greater numbers, including children. But adults have seen a rise by 53.4 percent between 2008 to 2012, according to the study. And while male usage "plummets" after the age of 18, women between the ages of 19 and 25 actually increase their usage, with 4.5 percent of women in that age group taking ADHD medication versus 3.5 percent of women 18 and under.

ADHD usage decreases for women over time, but it remains higher than males' usage. Here's a chart from the study that compares female to male usage: 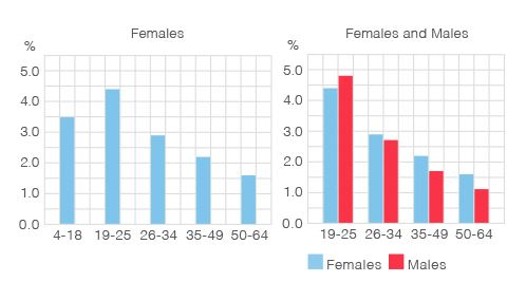 Express Scripts offers several explanations for the increased usage among females. First, females are less likely than males to show signs of having an ADHD disorder while children, so they might not know they have it. As they get older, they notice symptoms and seek treatment.

See also: Got Drugs? St. Louis Officials Would Like Your Unwanted Prescription Medications

Other possible reasons include females being more likely to adhere to a prescribed medical plan, abusing ADHD meds to lose weight (because stimulants decrease appetite), and finally, according to Dr. Joseph Austerman of the Center for Pediatric Behavioral Health at Cleveland Clinic, simple coffee just not doing the trick.

"Another factor that has an appreciable effect in driving ADHD drug use, especially in career women, is the 'superwoman syndrome,'" Austerman says in the study. "For some women, stimulants may provide the extra energy and focus they need to perform at a high level both at home and on the job." Click on the next page to read about Missouri's ADHD usage...