"You Just Don't See That In New York:" MTV Exec Studies the Millennials of St. Louis 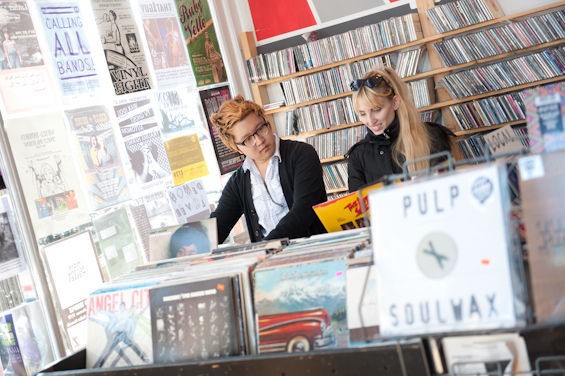 Alison Hillhouse doesn't like to use the word "hipster."

As MTV's vice president of Insights Innovation, Hillhouse, 37, is tasked with studying young people -- including those who fall under that deprecatory label -- and glean new truths or trends that guide developers to create the popular network's new hit show.

So when she arrived from New York to study the revitalization of a city she'd once called home, she didn't ask where the "hipster" hang-outs were. She asked to talk to the artists, the entrepreneurs, the gadflies, the city-dwellers, the movers and shakers, the tastemakers of the millennial generation.

And her search took her to Cherokee Street.

"There are so many interesting, communal things that are happening, it's like there's a small commune happening around the Cherokee Street area," Hillhouse tells Daily RFT. "The energy was amazing. There is a real sense of possibility, of creating this new vision, of making the city, especially south city, a great place."

The lessons Hillhouse learned from local millennials -- later published as an after-thought in a rudimentary and academic video -- are old hat for those who actually live here: It's cheaper to live in St. Louis than Chicago, New York or LA. The talent pools aren't oversaturated with artists or contaminated by agents and business interests. Midwestern neighborliness means partners for projects are easy to find.

But something about St. Louis' artistic fervor, entrepreneurial dedication and forward-thinking optimism -- all at a uniquely Midwestern, determinedly laid-back pace -- seemed to strike Hillhouse' team as exciting and important.

"I think every single person we talked to, we walked away smiling. They were just so enthusiastic about St. Louis," Hillhouse says. "It was just so exciting to talk about the projects that were happening in the area. Nothing held them back."

Hillhouse repeatedly told Daily RFT, "You just don't see that in a city like New York," or "You don't have that kind of opportunity in Brooklyn," when discussing the dynamics of creation and self-expression here. From affordable apartments to an audience with top government officials, it's all easier to get in St. Louis.

"A bunch of people talked about how it's easy to get a meeting with [St. Louis Mayor Francis Slay] and to share an idea with him and go straight to the top," Hillhouse says. Being from St. Louis herself, Hillhouse knew people would be nice, but in St. Louis, "everybody is there to help each other out."

Hillhouse's foray into the Cherokee Street scene only scratches the surface of the millennial experience in St. Louis -- a fact she readily admits. And she's not looking to pitch a new MTV docudrama called St. Louis Entrepreneurs on Cherokee Street.

But as she talks about the St. Louis she rediscovered during that two-day trip in February, her voice fills with a bewildered respect for the culture of young people in St. Louis.

"I think fifteen years from now, cities across the country are going to feel very different because of the things millennials are doing," she says. "St. Louis is just a great city. I hope that it continues -- and I know that it will continue -- to grow."