For the past three nights, Shaila Evans has packed her book bag and set it by the front door hoping to go to school the next day. And every morning she has been disappointed.

The Ferguson-Florissant School District was supposed to begin classes Thursday, August 14. Owing to the protests and riots, the district postponed the beginning of the school year to the following Monday, August 18, but then canceled classes for the entire week altogether.

"She's really anxious to start school," says her mother, Janeatha Evans. "She loves school, and she's been saying how she wants to start learning and making new friends."

Teachers at Walnut Grove Elementary are just as anxious.

At 9 a.m. Tuesday morning, a couple of Walnut Grove teachers and other volunteers stood outside the Ferguson Public Library, a few blocks north of the Ferguson Police Department, waving signs that read "Teachers Here to Teach" and "Students Welcome." 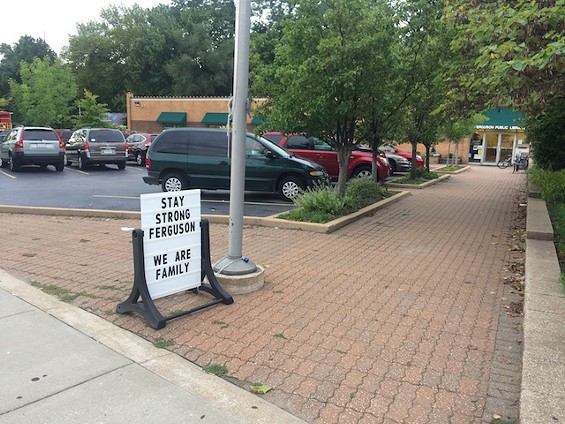 Carrie Pace -- sometimes called Mrs. Paste by the students because she's an art teacher at Walnut Grove -- spearheaded the collaboration with the Ferguson Public Library to provide students with a place to learn despite school being canceled.

"We're trying to provide a positive and productive place for students," she says. "A place for them to come and do something educational and meet up with other students."

A meeting room in the back of the cozy library buzzes with schoollike chatter. One teacher reads a book aloud to a group of kids while another helps students draw and make posters. One poster reads: "Stop the violence. Let kids go back to school." Another table is dedicated to science lessons and one to math.

Shaila and Janeatha have fun with the glue. Janeatha writes each of their names in glue on colored construction paper. Then she mixes food coloring with sugar and sprinkles it on the glue.

"It's nice to see this to take the kids' minds off riots and war zones," Janeatha says. "[Shaila] understands the situation and the protests, but she doesn't get the violence and destroying property."

About 30 kids filtered in and out by midafternoon, and Pace expected more to come before the teachers and volunteers left at 4 p.m. They'll be at the library again today from 9 a.m. until 4 p.m., but Pace is uncertain about Thursday and Friday. The staff is required to attend a professional development session that will address crisis-management counseling on those days.

The Ferguson-Florissant School District is scheduled to resume classes Monday, August 25. The nearby Jennings and Riverview districts also canceled school yesterday, but they resumed today.