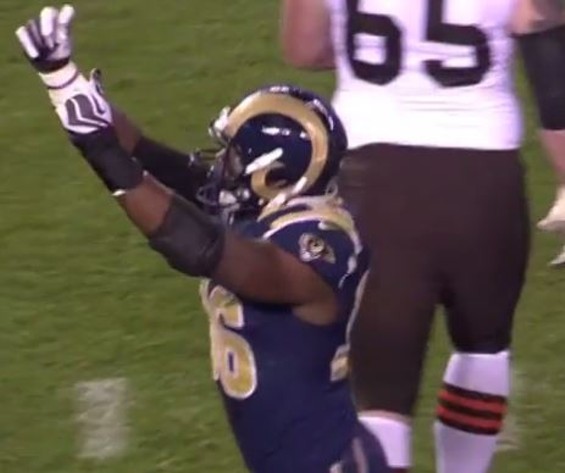 Be careful what you bet on, or you'll have to put your money where your tweet is.

Twitter user @SquareKnight made a boldly hyperbolic wager with the world before Saturday's matchup between the St. Louis Rams and the Cleveland Browns.

Rams vs Browns tonight. If Michael Sam sacks Johnny Football & gives the money sign, drinks are on me. For everyone in the world. Forever.

Sam, the NFL's first out gay player, has been competing for a roster spot on the St. Louis Rams since he was drafted in the seventh round. Saturday night he brought his A-game, sacking Manziel twice: once with just under eleven minutes remaining in the fourth quarter and again on the final play of the game. With Manziel, a.k.a. Johnny "Football," on the ground, Sam celebrated by imitating Manziel's "money" sign.

"If you're going to sack Johnny, you've got to do [the money sign] once," Sam told ESPN. Sam also sacked Manziel when Sam was a junior and a senior at the University of Missouri.

Sam's sack and celebratory dance perfectly matched what @SquareKnight (who declined to share his real name with media) bet before the game even started. Drinks for everyone in the world? Forever? Sounds expensive, but if he's offering, we'll take a Hamm's.

Today I messed up by promising mankind free booze for all eternity.

@SquareKnight started backing away from his bet (and from angry Sam fans on Twitter who thought the bet was disrespectful of the rookie) and began wondering publicly how he could get out of buying drinks for the entire world like an alcoholic Coca-Cola commercial.

It was fun hoping Michael Sam would sack Johnny Football and I expect some ribbing but some of you all are hateful and taking it too far.

Anyone know Sam's fave charity? So pumped he sacked JFF. If I can't perpetually intoxicate society, I can contribute to its betterment.

That's when Sam stepped in with a suggestion of his own:

I heard there was a drink offer... In lieu of that @SquareKnight the Boys & Girls Club of Greater STL could use help! pic.twitter.com/qzseOXJfED

.@MichaelSamNFL: Consider it done. Great play, btw. Give 'em all Hell in the NFL! You're a class act. God bless, brother.

And since this guy seems to be able to predict football future:

Since my frivolous bets influence human events ... if the Jets win the Super Bowl, free puppies and ice cream for every kid in America.