Devin James, the public-relations representative brought in to repair the flawed image of Ferguson and its police department has been fired from a St. Louis development group after it was revealed that he has a felony conviction for fatally shooting an unarmed man in 2004.

The Post-Dispatch revealed Thursday night that James, 32, was convicted of reckless homicide ten years ago in Memphis, an act he claimed was done in self-defense. Shortly after the Post contacted the St. Louis Economic Development Partnership (which officially pays James), his contract was ended, according to the report.

James doesn't deny that he was involved in gangs and drugs in his younger years. But he says he was cleaning his life up when on October 20, 2004, he shot and killed Randy Steward.

James' story is that he and Steward arranged to meet at the former's home. A friend of Steward's said he received a phone call from James who told him to come pick up "a package." According to court documents of James' testimony, when Steward arrived, a man named Marcus Moffitt -- also known as "Big D" -- walked in through the back door, telling James to "Lay down, bitch!"

Steward then said, "We're going to rob your punk ass!"

Once James saw that Big D had a 9mm handgun, he ran into his bedroom to grab his own 9 mm. James then came back out to the living room with his firearm, and once Big D saw it, he and Steward ran out the back door. See also: Why Ferguson City Officials Still Haven't Met with the Family of Michael Brown

"Well, they saw I had [the gun]. It was like a crazy setup," James said in court documents. "It's like they ran out and when I got out they started firing, so I was trying to get out just to secure my property, and then shots were fired again and then I fired."

James then says he tried to call 911, but the phone inside his house wasn't working. He went out to his car to get his cell phone, but then a white vehicle rolled up and fired shots at him. 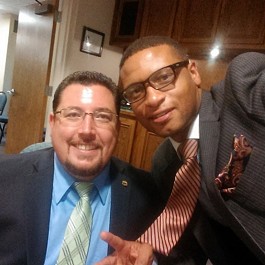 When police arrived, Steward was found dead with 2.5 grams of crack in his pocket. He had been shot eight times. Police say they searched the scene and did not find any casings that came from another gun. The only casings were James'. And Big D, who was brought in to testify by prosecutors, said he was never at James' house that day. In fact, he says he didn't even know James or where he lived.

Though he was originally charged with voluntary manslaughter, James was found guilty of the lesser offense of reckless homicide. He was sentenced to 30 months in a workhouse with all but 90 days suspended, as well as five years of probation.

James told the court that at the time of the shooting, he was attending the University of Memphis, owned a marketing company, and had a four-year-old son to take care of.

Ten years later, James was tasked with handling PR for a city and police department grappling over how to deal with its own killing of an unarmed man -- and getting paid $100,000 by the Development Partnership to do so. But soon after the story broke, that lucrative contract ended.

James quickly went on the offensive, telling KMOV (Channel 4) that County Executive Charlie Dooley was a "coward" for firing him. But he also said that despite the setback with the Development Partnership, Ferguson officials want to continue their relationship.

And Ferguson mayor James Knowles told the Post that he knew about James' past, but that didn't change his mind about working with the young PR man. In fact, he liked the story of a man with a troubled past who was able to turn his life around.

"I called the city manager immediately, and I called the mayor, and they assured me they wanted me to stay and that they value my expertise," James told the station.

It's not yet clear exactly what role -- if any -- James will have with Ferguson.

Despite the polarized politics of Ferguson situation, James found at least one sympathizer: Writer and cab driver Umar Lee, who has been a constant presence and voice in the Ferguson protests, said he wouldn't hold James' past against him.

See also: The Mayor Cares About Black People and 17 Other Clarifications from Ferguson City Council

Regardless of his past, James hasn't exactly been roundly praised for his handling of the Ferguson public-relations plan. Reporters have accused him of being uncommunicative, and city officials aren't much more popular than they were since the days after the Michael Brown shooting. That's especially true for Police Chief Thomas Jackson -- whose resignation protesters are demanding -- despite the video apology released Thursday (which doesn't seem to have won over many critics).

James tells KMOV he takes full credit for the video, which he says wouldn't have happened without his supervision.