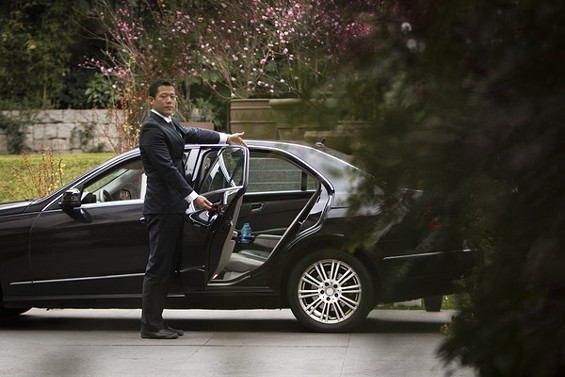 You can now Uber your way around St. Louis.

After months of negotiations with city officials over rules for app-based ride-for-hire businesses, Uber is launching its Uber Black service in the Lou starting at 3 p.m. on Thursday, October 9. Uber received unanimous approval from the Metropolitan Taxicab Commission on Tuesday.

Uber Black offers customers a premium sedan on demand via the Uber app. Uber's ride-sharing service, called UberX, along with Lyft, another app-based ride-sharing business, are still barred from operating in St. Louis.

Uber Black charges a base rate of $7 plus 45 cents per minute and $3.55 per mile. The minimum fare is $15, and any rider who cancels his or her order five minutes after placing it pays a $10 cancellation fee.

See also: Why Uber Won't Look Anything Like Lyft When It Launches in St. Louis

Shah says the company has been receiving several emails a day asking when the ride-for-hire app would go live in St. Louis. The company plans to have dozens of cars available on launch day and wants to partner with other limo companies so it can offer more rides. Uber isn't hiring any new drivers for the St. Louis launch.

"We're expecting demand to be very high," Shah tells Daily RFT. "We wanted to be here as soon as possible."

Want a free ride? Use the promo code STLFREE this week.

Jump to comments
« St. Louis Area Police Now Have Five…  |  What Are We Missing? How to Send Ne… »