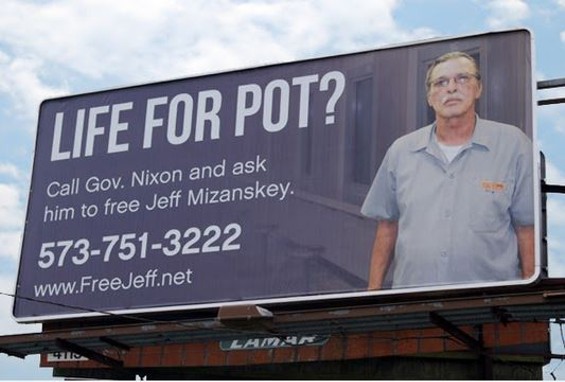 Governor Jay Nixon is the only person in the world who has the authority to release Jeff Mizanskey from prison. And activists want to make sure he's reminded of that every time he leaves his house.

The marijuana reform group Show-Me Cannabis recently purchased billboard space less than two miles away from the governor's mansion. The billboard urges people to call Nixon directly and ask for the release of Mizanskey, who is 21 years into a life-without-parole sentence for marijuana-only charges.

The billboard resides on Southbound US 54, shortly after the interchange with US 63. It's visible just before motorists cross over the bridge to enter Jefferson City from the north. Located right across from the Jefferson City airport and less than two miles across the river to the Governor's Mansion, advocates for Jeff's release are excited about the attention it will draw to his case.

"The billboard's close proximity to the governor's mansion seeks to remind him of Jeff's clemency petition, which has been on his desk for more than a year," Aaron Malin, a researcher at Show-Me Cannabis, tells Daily RFT.

He adds: "Jeff's family and friends have not forgotten about him, and neither should Governor Nixon."

Mizanskey, whose story has been profiled in the Riverfront Times, was arrested in 1994 for being involved in a purchase of approximately six to seven pounds of marijuana. He had two prior marijuana felonies on his record, one for a half pound and the other for about two ounces (any amount of marijuana more than 35 grams is a felony in Missouri).

The prior offenses made Mizanskey eligible to be sentenced as a "Prior and Persistent Drug Offender," which is a three-strike, drug-only law in Missouri that requires sentences to be served without parole. The judge gave Mizanskey a life sentence.

This year, Mizanskey's backers have increased awareness of the 61-year-old's plight through online campaigns and billboard ads with the hopes of convincing Governor Nixon of granting clemency.

The pressure has led to national and international media coverage for Mizanskey, but there's been no word from Nixon. And even Jeff Mittelhauser, the prosecutor who put Mizanskey away 21 years ago, has said he supports clemency.

Without any action from Nixon, activists and family members of Mizanskey say they'll continue to push for clemency.

"It's not so much a change in heart as it is a realization that after he has sat in prison for eighteen or nineteen or twenty years. That's what I believe is enough punishment for the crime he committed," Mittelhauser told CNN.

"As the governor hears from more and more Missourians on this issue, it is our hope that he will act swiftly and justly to release Jeff from prison," says Malin. "If a rehabilitated 61-year-old great-grandfather doing life for marijuana doesn't deserve clemency, who does?"