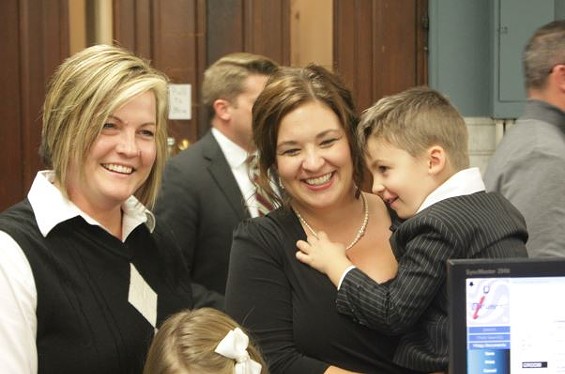 After years of working at Planned Parenthood, Kelley Harris is trained to spot threat letters.

So when a letter with an incomplete return address arrived at the St. Louis home she shares with her new wife and their two children, Harris got suspicious.

"As soon as I saw it in the mail, I thought, 'Oh, this is probably a hate letter,'" Harris tells Daily RFT.

The anonymous, lengthy letter sent from Omar, West Virginia, and postmarked through Charleston, West Virginia, which was postmarked the day after Harris and Barnard married at St. Louis City Hall after a judge ruled Missouri's ten-year-old ban on same-sex marriage is unconstitutional, appears to target the couple for their same-sex nuptials. Harris says she and her wife don't know anyone in West Virginia. 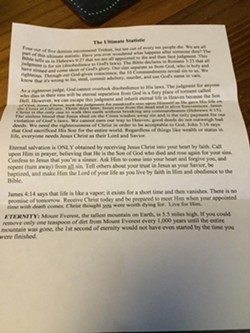 The letter (transcribed below) attempts to convince Harris and her wife, Kelly Barnard, to "repent (turn away) from all sin" and spend eternity with Jesus.

"As a righteous judge, God cannot overlook disobedience to His laws," the letter says. "The judgement for anyone who dies in their sins will be eternal separation from God in a fiery place of torment called Hell."

There's no explicit threat or promise of further action, but Harris says just the fact that the author knew her wife's name and where their family lives feels threatening.

"It's a little scary to have somebody addressing something to your home in an anonymous way," Harris says. "It's not threatening in a 'They are going to come and get you' type of threat. It's that insecurity you get. It feels invasive."

Harris says she thinks the response would have been more hateful and overwhelming if Missouri had legalized gay marriage ten years earlier. Now, she says, there's only the occasional online comment and this strange letter.

"Hopefully -- I'll give this person the benefit of the doubt -- they feel they're doing something they need to do to be happy in life," Harris says. "Hopefully they know it makes people feel uncomfortable and threatened, and maybe they could do it in a different way."

Here's the full text of the letter:

Four out of five dentists recommend Trident, but ten out of every ten people will die. We are all part of this ultimate statistic. Have you ever wondered what happens after someone dies? The Bible tells us in Hebrews 9:27 that we are all appointed to die and then face judgement. THis judgement is for isn (disobedience to God's laws.) The Bible declares in Romans 3:23 that all have sinned and come short of God's glory. Our sins separate us from God, who is holy and righteous. Through our God-given conscience, the 10 commandments reveal sin to us. We know that it's wrong to lie, steal, commit adultery, murder and use God's name in vain.

As a righteous judge, God cannot overlook disobedience to His laws. The judgement for anyone who dies in their sins will be eternal separation from God in a fiery place of torment called Hell. However, we can escape this judgement and inherit eternal life in Heaven because the Son of God, Jesus Christ, took the judgement for mankind's sins upon Himself as He gave His life on the Cross at Calvary. Three days later, Jesus rose from the dead and is alive forevermore. Jesus Christ is the only one to walk this earth without breaking any commandments (Hebrews 4:15). The sinless blood that jesus shed on the Cross washes away sin and is the only payment for our violation of God's laws. We cannot earn our way to Heaven; good deeds do not outweigh bad deeds. We need the righteousness of Christ in order to be acceptable to God. John 3:16 says that God sacrificed His Son for the entire world. Regardless of things like wealth or status in life, everyone needs Jesus Christ as their Lord and Savior.

Eternal salvation is ONLY obtained by receiving Jesus Christ into your heart by faith. Call upon Him in Prayer, believing that He is the Son of God who died and rose again for your sins. Confess to Jesus that you're a sinner. Ask Him to come into your heart and forgive you, and repent (turn away) from all sin. Tell others about your trust in Jesus as your Savior, be baptized, and make Him the Lord of your life as you live by faith in Him and obedience to the Bible.

James 4:14 says that life is like a vapor; it exists for a short time and then vanishes. There is no promise of tomorrow. Receive Christ today and be prepared to meet him when your appointed time with death comes. Christ thought you were worth dying for. Live for Him.

ETERNITY: Mount Everest, the tallest mountain on Earth, is 5.5 miles high. If you could remove only one teaspoon of dirt from Mount Everest every 1,000 years until the entire mountain was gone, the 1st second of eternity would not have even started by the time you were finished.